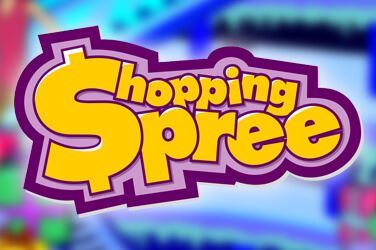 The online casino sector has never worried about stereotypes and so here we have a slots game ostensibly aimed at women.

Fortunately, Shopping Spree is a light-hearted and fun slots title that can be enjoyed by all players, though it is not to be confused with the progressive jackpot game of the same name.

Shopping Spree has been produced by a company called Eyecon, which has an impressive reputation as a producer of modern slots games. In fact, the developer began life as a video-games focused firm, back in 1997, but since shifting their focus to slots games, they’ve enjoyed a sustained run of success, providing games for the global industry from their twin bases in Australia and Alderney.

This popular Eyecon slots title features 5 reels and 25 paylines, along with a Wild symbol that can pay 9,500x your stake if you line up five along a line, and Scatter symbols that give players 15 free games, all of which have a payout of 3x. Like most of the games from the Eyecon stable, Shopping Spree features a simple and clear design, with the images being drawn in a basic, cartoonish style, which makes for a light-hearted and distinctive gameplay atmosphere.

On the reels themselves, the game employs four different forms of discount symbol, each of which can pay out as much as 100 coins. Other symbols in-keeping with the theme are the gift box and the tea and cake, which both pay the player anything up to 125 coins, while the ring and perfume bottle are worth 250 coins. If you land the lipstick, you can win a payout of up to 450 coins and the biggest prizes are reserved for the high heels and necklace, which can pay at four different prize rates, with the highest being 950 coins if you can land five of these symbols on one payline.

Shopping Spree also includes a Wild, in this case, a shopper, who substitutes for all other icons, with the exception of the Scatter. You can earn up to 9,500 coins if you land as many as five of these Wilds, and whenever she is part of a winning combination with regular icons, the payout is doubled.

Shopping Spree is a medium volatility slot game with a 95% RTP and comes with an interesting Free Games bonus feature. If you land between three and five of the handbag symbol, the Free Game will be triggered. This will give you a payout of up to 450x the original player stake, along with an additional bonus of 15 free spins. And, if you bring up three Scatters or more during the same spin, all the free spins are re-launched, which can be repeated up to 15 times.

Although it would have been good to see Eyecon incorporate their popular pick’em and match features in Shopping Spree, it is an entertaining, light slots title that combines a simple aesthetic with user-friendly gameplay and a healthy bonus offer.

If you’re shopping around for other slots to play, check out 20p Shot, I am the Law, Fruit Climber and Juicy Ninja.