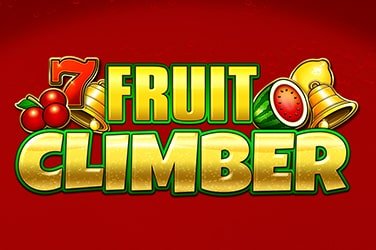 One of the better qualities of older style slot games is that they’re pretty simple to play, and there’s just one goal in mind: Make as much cash as quickly as you can. That’s an ethos we seem to have lost a little in recent years with ever more complicated slots dominating the market, but then slots like Fruit Climber come along and remind us that that old spirit is still out there.

It’s a slot with a few surprises up its sleeve too! But is this game a retro rollercoaster or a bit of a drag? Let’s find out in our Fruit Climber slot game review.

We’ll start off by confirming that there’s nothing at all modern about the look of this game initially, with 2D representations of all your favourite fruit symbols: Pairs of cherries, pairs of lemons, pairs of bells and watermelons as well as the lucky 7 all make an appearance. The sound effects and the animations are pretty basic, but it captures the look and feel of a classic slot well whilst also working perfectly on mobile and tablet, which is a big win in a modern game. Aside from that there’s not much else going on in this game, though there are a pair of flashing lights that we’ll get to later!

One advantage the Fruit Climber slot game has over actual classic games is the increased number of reels and rows, standing at five and three respectively, which is a lot better than just the three and one as you used to see. You also get ten pay lines to play on, which is nice, but not nearly as good as the number that you can get later on. That’s where the flashing lights come in, indicating that the number of reels is about to expand, giving you a maximum of 35 pay lines to play with! This is a big expansion in your chances of winning for no extra bet, which is always a good thing, though you’ll still need to bet close to the £/€/$200 betting limit in order to overcome the lower than average RTP of 95%.

There aren’t any specific bonus rounds in this game, another consequence of playing a retro slot designed to be like older games, but that doesn’t mean that there aren’t other features. The main one of these is the twinned reels feature, which makes two of the reels identical at random as you roll. This is especially effective at generating wins when you play with fully expanded reels, and can make a profitable game pay extremely well when you’re betting close to the maximum!

Fruit Climber is an excellent combination of old and new, bringing the simplicity and aesthetics of a retro slot game to life with some interesting new mechanics borrowed from more modern slots. While there aren’t many bells and whistles to speak of, you won’t mind too much when the reels are expanding and generating bigger and bigger wins, especially when the twin reels come into play!