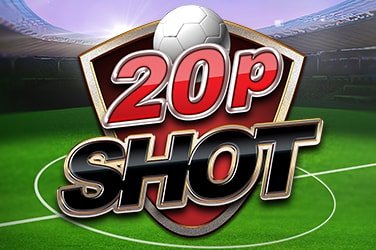 Powered by Inspired Gaming, the 20p Shot Slot Game is a three-reel, three-row slot with five winning ways. Released in May 2019, the game has an immersive football theme and can be enjoyed across all of your devices, thanks to the fully optimised design.

With a Return to Player (RTP) of 95.00%, the 20p Shot Slot Game is considered a medium to high volatility slot and offers the chance to win up to 2,500 times your total line stake.

The 20p Shot Slot Game’s design is pretty impressive, though relatively simple. The graphics are high-quality, with a football stadium visible behind the semi-transparent reels. There isn’t much else going on in the background, but the simplicity works well. The accompanying soundtrack and sound effects add to the game-day atmosphere and create excitement.

In terms of symbols, you’ll find ten in total, and the simple gaming engine means you’ll be rewarded with a win whenever you land three identical symbols on any reel. Symbols include footballs with various country’s flags, an England flag, a blue football player, a yellow and white player, and gold and silver game logos. The latter two are the highest paying of the set.

The 20p Shot Slot Game’s minimum bet is set at a reasonable $/€/£00.20, whilst the highest bet is limited to $/€/£150.00 per spin. This vast range of available stake options should attract both new online video slot players and high-rollers, though the slot’s higher volatility of the slot does mean that you may have to wait a while for payouts.

The 20p Shot Slot Game is very straight-forward, so you’ll find that it isn’t packed with flashy bonus symbols. However, with the exception of the 20p Shot gold and silver logos, every other symbol can appear stacked, allowing you to land generous payouts at times. There’s also an opportunity to land free spins if enough scatters land in view across the reels.

There’s an in-built Fortune Bet feature, which allows you to play with an extra 50% of your current stake to transform the highest paying symbol into a wild symbol. This, in turn, will substitute for all standard symbols, resulting in more significant wins. You can turn this feature on and off as you wish.

The 20p Shot Slot Game is a simplistic game that offers just one bonus round if you manage to land enough scatters. The pace is pretty slow and relaxed, so it won’t suit those looking for fast-paced, action-packed video slots. However, the setting is excellent with crisp and clear graphics and an atmospheric soundtrack accompanying the gameplay experience. Animations are smooth, and the traditional reel engine will be preferred by some players. Overall, the 20p Shot Slot Game is worth a spin to enjoy the realistic imagery and sleek graphics, alongside the chance to walk off the pitch with some significant winnings.