I Am The Law Slot Game Review 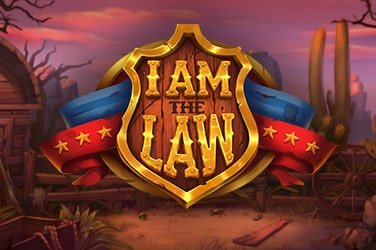 Slots players hoping for a Judge Dredd themed slot will be disappointed to learn that I Am The Law is actually a Western, set in the lawless world of the American gold rush. There are plenty of familiar sights in this game, which anyone who knows anything about the Wild West will recognise instantly, but there are plenty of opportunities to play some fun bonuses along the way.

So will you strike gold in this desolate town, or will you be pushing up daisies by dawn? Let’s take a look in our I Am The Law slot game review.

You probably know exactly how the I Am The Law slot game looks already without us having to tell you, but here goes anyway: The background is a deserted Western main street lined with rickety wooden shops and a dodgy looking saloon, while the low value symbols are the standard 9 – A in wood but with iron plating and in a Western style font. The higher end of the scale features symbols that include a wanted poster, a stagecoach, a revolver, a shotgun and a whisky bottle, while the bonus symbols include a sheriff’s badge and a mean looking female sheriff. The presentation really is excellent, including an atmospheric Western soundtrack and some top quality graphics, making the theme work perfectly.

The mechanics in I Am The Law are fairly mainstream, with five reels and three rows combined with 25 pay lines to play on. You can bet a maximum of £/€/$100 per spin, which is a very nice position to be in when you hit the top prize of 1600x your stake, granting a potential win of £/€/$160,000! The RTP is solidly average at 96%, so it may pay to bet higher up the scale if you can, while there are plenty of opportunities to hit the big time in the bonuses.

I am the Law Bonuses

There are a few ways to maximize your wins in this game, first of all the Sheriff symbol, which is an expanding wild that can take over entire reels. This is the only bonus available in the main game, but luckily it’s not too difficult to get into the bonus round: The first of these is the Sheriff’s badge, which you can land two of to activate a pick and win feature that requires you to click six symbols and win prizes. Three wanted posters will also give you ten free spins to play with, with a couple of extra features, which allow you to add to the prize total that you collect at the end. Each outlaw symbol adds 1000x your stake, while an Outlaw and Sheriff on the reels at the same time adds another 4x each time they land together.

I Am The Law is a great looking game that uses a very familiar theme, but still manages to make a great stab of turning out something new and different. The symbols all look great, and the bonuses are diverse and fun enough to have you playing over and over again!