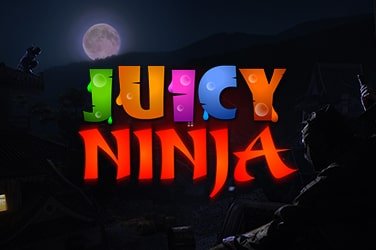 We usually associate the art of the ninja with stealth, subterfuge, espionage and assassination, so it’s hard to imagine what a practitioner of the way of the shadow could want from a load of melons.

That’s what Juicy Ninja is all about, though, so strap yourself in for a wacky concept that merges Ninja weapons and the dark arts with all your favourite symbols from a good old fashioned fruit machine. But will you find more cash than fruit in the shadows? Let’s find out in our Juicy Ninja slot game review.

It’s a strange concept but it’s one that Juicy Ninja runs with, and the background to the reels is suitably spooky, with a katana armed Ninja warrior skulking towards a house in the dead of night with a full moon overhead. Though while the background hews close to the Japanese theme of the title, the symbols themselves are much closer to this game’s fruit machine roots, and include all the standard fruity symbols such as cherries, plums, oranges, strawberries and grapes. The only nods to the Ninja element of this game come in the top prize and the wild, a Shuriken and a cute little Ninja warrior respectively.

Alongside the odd symbols in this game you also have a few fun mechanics to mix it up a little. For a start there are 243 ways to win in this game, and unlike other games with this many ways to win the top bet is still pretty high at £/€/$100, meaning the big prizes aren’t a slog to get hold of. The top paying normal symbol is only worth 35x your stake, but the Shuriken symbol is worth up to 150x your stake for five, meaning you can win as much as £/€/$187,250 as a maximum jackpot! All in all the game’s RTP is exactly average at 96%, and while there are no bonuses to play it does mean that all of the cash can be won in just one spin in the main game, and there aren’t any silly hoops to jump through.

While it’s true that there are no specific bonus rounds to play in the Juicy Ninja slot game, that doesn’t mean there aren’t any extra features at all. The biggest extra is the expanding Ninja wild, which can take over entire reels when it lands on the screen. The Ninja lands on the reels and drops to the bottom of the reel in a display of cat-like agility, turning all the symbols that it passes over into wilds.

Juicy Ninja is a fun little slot game that makes good use of an unusual theme, combining the shadowy world of the Ninja with the bright and bubbly world of fruit machines. There are some nice mechanics on display and some good prizes, and while it would have been nice to have had some extra bonuses, you can’t argue with a top jackpot of more than £/€/$100,000! A great way to update a traditional fruit machine for the modern era!