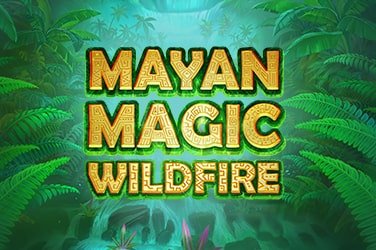 We head down to the Central American jungle for the Mayan Magic Wildfire slot game which, if it hadn’t already been made obvious, is a game that really does ooze colour and life.

Today, we’re going to see whether or not that translates into a successful slot.

The 5×3 reel layout is designed in a really elegant way to allow the board to shine through with the theming, but with just 10 paylines to work with, you’ll know what kind of experience you’re in store for pretty quickly.

There are themed symbols to be found throughout here between the five coloured gemstones and the snake, leopard and Mayan characters.

The return to player (RTP) percentage is important to many, many slot players out there, and the same is true for those who decide to indulge in the Mayan Magic Wildfire slot game. The reported RTP comes out at 96.04% and while that may be viewed as below the standard industry average, the medium volatility should mean a consistent stream of smaller wins is definitely possible.

Players can start off with a 10p minimum stake before working it up to a maximum of $/€/£100, and from there, there’s a chance that you could walk away with up to 1,264x your initial stake.

From the intricacies behind the design work to the soundtrack and overall theming, this really is as close to perfect as it gets within the slot industry. This game immediately hooks us in and the visual side of that plays a huge role, so bravo to Nolimit City for that.

Mayan Wilds – if you’re able to land a wild on the middle three reels, the Mayan bonus will be triggered. It’ll transform the middle slot to a sticky wild that sticks for the entire feature, with additional wilds providing you with extra spins and a bigger multiplier.

Mystery Sync – this can be triggered on any given spin, and it will synchronise the symbols on the three middle reels to give you some even bigger wins.

The Mayan Magic Wildfire slot game is passionate, it’s full of energy, and it truly does give us an experience unlike any other.

Some may argue that the bonus features could be fleshed out a bit more, and there’s some logic behind that, but the design of this slot alone is enough to make us want to come back for more. The provider has spent a lot of time and energy transforming this idea into what the end product has become, and we’re grateful for their hard work and determination.

If you go wild for slot games, you may also like Western Wilds, Viking Pays, Aeterna and Rainbow Riches Cluster Magic.