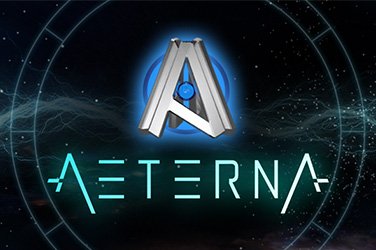 Check all systems and prepare for lift-off in this slot, which has us whisking off to space to try out an innovative looking system of reels. Aeterna is a slot game by industry minnows Black Pudding Games, and while you often don’t get the cutting edge graphics or movie quality design with small designers, innovation and experimentation come with the territory, as this game proves.

So is this space-bound experiment a wild success or should it go back to the drawing board? Let’s take a look in our Aeterna review.

The first thing we’ll say about Aeterna is that it’s unlikely you’ve ever seen a slot like this before, and you could be forgiven for thinking that this one dropped in from another planet. It consists of three reels which have been upended into a kind of star shape rather than being presented in rows as usual, while the background is a classic starscape featuring planets and distant nebulas. The symbols themselves are pretty abstract, looking like futuristic versions of basic shapes such as triangles, hexagons, cylinders, spheres and stars. Accompanying the visuals are whizzy sound effects and animations, while a thumping modern beat serves as a soundtrack.

As you might expect given the interesting new layout, the mechanics of this game are also a bit different. Wins are calculated using the symbols that land on the outside of the star, with players having to land three or more of the same symbol next to each other to form a winning combo. The Aeterna slot game also uses the cascading reels mechanic, so if you land a winning combo those symbols are removed and replaced by new ones that may themselves form a win, creating a string of wins that continues until no more combinations are possible. Even better, each of these wins adds another 1x to the multiplier, so long strings of wins can also create big multipliers on top. The wins in the main game aren’t enormous, and while the highest payer gets you 1000x for six cubes the majority of payouts are in the double figures, which isn’t a huge amount even with a £/€/$50 betting limit. This is made up for by the multipliers, however, which can make your wins much bigger and contribute to an overall RTP of 96.19%

On top of those generous multipliers, there are also a couple of bonuses. The first is a standard free spins feature, which is activated by landing up to 6 of the A-shaped scatters for a maximum of 30 free spins that attract a 2x multiplier on all wins. The second bonus is a passive one that happens as you play so that when you land two separate wins on one spin one of those wins is doubled at random.

Aeterna is a nice surprise that gives us something genuinely new and innovative to play with, as well as some fun new game modes that are as interesting as they are profitable. You won’t win any massive jackpots in this game, but the frequency of wins you generate combined with those tasty multipliers means you’ll find your prize fund is still pretty healthy anyway!