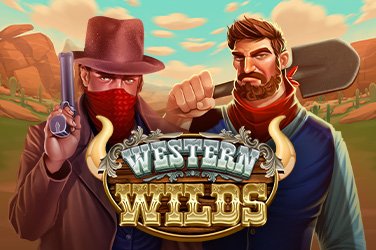 Everybody who plays slots has some of that cowboy spirit in them, the kind of person who risks it all in search of a fortune, setting off into wild and unknown terrain in search of gold. That’s probably why Wild West themed slots like Western Wilds are still so popular to this day, and if you like the Western theme then this game will be right up your alley.

Just about every Western stereotype is present, from cowboys and gold mines to dynamite and saloon shootouts, but has this game struck gold or is it a dead-end? Let’s take a look in our Western Wilds review.

The action in Western Wilds takes place in the American south-west, with rocky canyons and cacti littering the background behind the reels, along with a cluster of Spanish style adobe buildings. The reels themselves seem to be held inside the bank, and given the amount of TNT you’re about to throw at this building, it seems reasonable to assume you’re robbing it, though the game never says. The low-value symbols are the generic 9 – A given a baroque circus-style makeover, while the high-value symbols are represented by various western mining themed symbols, including carts, hats, boots, bags of gold and gold pans.

The mechanics of the main game are pretty simple, and other than the fact that there are four rows and five reels rather than the usual three, there are also 1024 pay lines to play with so the possibility of plenty of wins remains high. This is a cascading reels based game, so winning combos are blown off-screen to be replaced by new symbols, effectively giving you a set of re-spins every spin. The betting limit isn’t very high, not surprising for a game with so many ways to win, and maxes out at £/€/$50 per spin. The RTP is 95.8%, which is a little below average, so you’ll need a high bet to have the best chance of making a load of cash. There are also a couple of extra features that come into play to help land more wins, so don’t worry!

As the name implies, this game is all about the wilds, so we’re going to take a look at how they work. The normal wild acts as you’d expect it would, replacing other symbols in order to complete combos, while the golden safe wild can expand to cover whole reels and generate bigger wins. A third symbol to look out for is the TNT box, which turns several symbols around it wild when it explodes, and landing more than one of these boxes in a chain fills up the meter by the reels. Land three in a row and you activate the free spins mechanic. The free spins take place inside the bank building and have you standing in front of a blown-up safe, with the safe mechanism and chunks of metal littering the floor. It’s time to fill your pockets and get out of there! The safe has a conveyor belt at the top full of tiny safe symbols, which move one position left with every spin. Get a safe symbol of one of the four colours into the blank square on the left and one of four special abilities will activate, which will apply for all of the 8 free spins.

For fans of Western movies and the Western Wilds slot game will be an absolute delight because it’s packed with just about every Western theme you can possibly imagine. On top of that, there are all kinds of fun mechanics to play with that will entertain you and make you rich. You’ve well and truly struck gold if you play this slot!