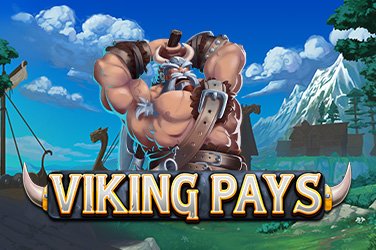 We’re not 100% sure why the Vikings are such a popular choice of theme for slots, because after all, they were much more famous for taking your money than for their generosity. That said we often find that Viking slots are some of the more creative ones of the bunch, so we’re always keen to try, which is why we are so excited about Viking Pays, a new effort from Inspired Gaming.

There are all the symbols and icons you’d expect, from badass gods to weapons galore, but does it pay well or will you find yourself lost at sea? Let’s take a look at our Viking Pays review.

The Viking Pays slot game is a thoroughly modern one, which means that it looks great and utilizes every inch of the power available to game designers these days, with excellently drawn symbols backed by fine animations and sound effects. Viking Pays places you firmly into the days of Viking conquest, with a scene of a Viking mead hall and longship ready to go, taking up the space behind the reels, whilst the reels themselves are filled with all kinds of stereotypical Viking gear. Shields emblazoned with runes make up the low-value symbols, while helmets, axes, drinking horns, a ring and a holy amulet make up the high-value symbols. The sounds of battle ring out as you spin the reels while well-crafted animations play when you make wins, further adding to the atmosphere.

As you’ll see, this game is all about the single impressive bonus feature, so don’t be too alarmed that the wins in the main game aren’t the most promising. The highest possible win in the main game is 20x your stake, gained by landing five longships, which is pretty grim when the maximum bet is just £/€/$20. But be assured that there is a maximum jackpot of £/€/$20,000 up for grabs, so you don’t need to worry about being short-changed. The RTP is also an average 95.58%, so that bonus round must be pretty sweet, eh?

The biggest attraction this game has to offer is infinite free spins, and when we say that we don’t mean infinite with a sneaky asterisk or any conditions, they really are infinite. You start them by landing up to five golden shield scatters, which give you three lives to play with during the free spins round, as well as a multiplier up to 5x depending on how many shields you started the bonus with. Each losing spin expends a life while each winning spin gives you all your lives back, so you can keep playing for as long as you can avoid losing three times in a row. The game even gives you a helping hand by chucking a ferocious Viking wild stacked onto one of the reels on your last life, increasing your chances of landing a win and continuing your spins. Additionally, each winning spin adds 1x to your multiplier up to a maximum of 50x, so you’ll be playing with some pretty hefty bonuses too!

The excellent bonus round in the Viking Pays slot game more than makes up for its poorly-paying main game, and it’s easy to see how you might get hooked on the amazing promise of infinite free spins. It’s an interesting mechanic you don’t see too often, and when combined with the excellent graphics and cute theme it makes for a winning combination!