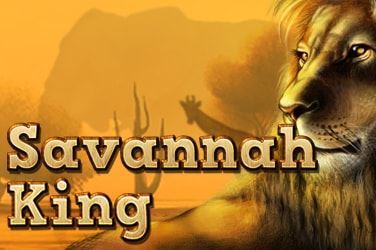 We love a good nature-themed slot here, and it’s hard to imagine a more majestic setting to explore the natural world than in the African savannahs, filled with predators and prey of every kind. In Savannah King, there’s more than personal satisfaction to be gained from spotting these animals, and you could be getting rich if you can find them all in the soft golden light of the plains.

So will you become king of the jungle or will you be dinner? Let’s take a look in our Savannah King review.

Tom Horn Gaming came into designing the Savannah King slot game with a mission, and that was to give players a lot of choice over how they played. Whether this is a good thing or not will depend on your style of play, but there’s no doubt that you’ll struggle to find a game more generous with its betting limits and less tricky to activate its bonuses.

But just because it’s a simple game, doesn’t mean it doesn’t look good. Savannah King goes to great lengths to capture the wilderness in detail, with a gorgeous background that depicts the wild expanse of the plains bathed in golden sunlight. While the lower symbols are simple wooden 9 – A icons, the more valuable symbols are represented by nicely drawn animals like Hippos, Zebras, Giraffes and Antelope. In the main game, the wild is the iconic king of the Savannah, the lion, while the scatter is represented by the famous and alien-looking Baobab Tree. Each of these symbols have engaging and well-rendered animations that play when you form a winning combo, including roaring lions and glimmering skies that go nicely with the animal-themed soundtrack.

We weren’t joking when we said this game was generous. There are only 15 paylines on this five by three grid, but you can place up to 50 coins on them, meaning a maximum potential bet of £/€/$750 which is one of the highest we’ve ever seen. This results in a massive potential jackpot of £/€/$250,000 and a good RTP of 96.4%.

The Baobab Tree is your magic symbol here, and collecting three or more of these scatters will grant you ten free spins with a multiplier of up to 5x depending on how many scatters you collected. During this game, you get access to the lion wild, which pays 100x your stake when you collect 5, but also a special second wild that looks like a diamond. This one can also finish any combo, while it also doubles the value of any win it’s part of. As if that wasn’t enough, you can cap it all off by using the gamble feature, which gives you a chance to double your winnings. Guess the colour of a drawn card correctly and you’ll double all the money you won in the bonus round, or get it wrong and lose it all.

Savannah King is an easy to play slot that is well designed and looks good, but the most important thing for us was the high betting limit which boosts your potential into the stratosphere. It’s nice to play a game that doesn’t try and dictate how you play and just lets you get on with gaming, so if you’re after a title that’s just about the adrenaline and not about the gimmicks, this is the one for you.

If you want to try more slots at Casino77, you could give these a try Spectra, Snowflakes, Richie in Vegas and The Curious Cabinet.