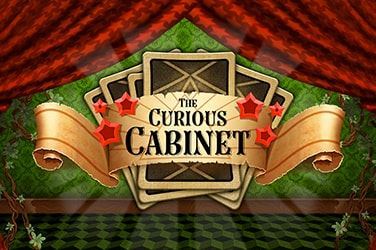 Check out this Curious Cabinet game review if you are curious about what the cabinet holds, although those who check it out will be pleasantly rewarded!

This Curious Cabinet slot game features a number of great visuals that provide an immersive experience.

The game features a playing grid that can be found in a well-decorated room, with a number of different designs having been utilised. The grid consists of 5 reels and features a total of 4 rows in which the icons can appear, whilst there are a total of 40 paylines that can be used.

With this Curious Cabinet slot game featuring inside a cabinet, the icons that have been used by Irondog Studios certainly help to make things as curious as possible as there are a number of rather different icons that can be collected.

These include things such as butterflies, hearts with pins through them, frogs, crystal balls, magic potion bottles, skulls and orb staffs. Players will also be able to find a wild, which is represented by the rose that can appear on each of the reels and can substitute for all icons to try and help form a winning sequence, whilst also providing a win reward when three or more appear on one spin.

Iron dog Studios have packed this game with several Curious Cabinet bonus features that can be all be triggered in this game.

The first is the 2-high doll icon that can be found, and this will rewards players as a scatter when four single parts appear on the reels. Players who obtain a winning doll will see it expand to 3-high and four of these will see a prize be awarded, with up to 600x the bet if 15 are collected.

The 2-high monster icons that can appear also pay in the same way, but a win with this icon will see it expand to become a 2×2 monster icon. Players who achieve 18 of these on the reels will be able to obtain a prize of 1,000x their stake!

The silver drawers that appear on reels 1, 3 and 5 will trigger the ‘Silver Drawer’ Curious Cabinet bonus feature, which will allow players to win prizes that include 10x the stake, 2x multipliers, a respin with sticky wilds. Those who manage to land two of these icons will trigger the free spins game, with 8 free spins available.

Those that trigger this Curious Cabinet bonus will find that an additional row of drawers are added to the reels, with a silver, gold, silver, gold and silver drawer being added. The silver drawers can see cash prizes of 2x the stake or a 2x multiplier be won, whereas the golden drawers will trigger the ‘Gold Drawer’ feature that will provide cash prizes of up to 50x the bet or a 5x multiplier.

Casino77 players should also note that these drawers can also be empty, but they are guaranteed to get at least one winning drawer on each spin made.

In addition, any wild that appears in the bottom position of any reel on the grid will immediately be expanded, with more than one wild possibly appearing on each free spin.

The Curious Cabinet slot game review took a look at the return to player (RTP) rate made available by Irondog Studios for this title and found it to be around 96%.

Those who were curious about what this game was all about will have been pleased that they checked out this Curious Cabinet slot review as they would have found it almost mindblowing with how many bonuses are available! With a number of free spins, win multipliers and expanding wilds, the win potential is massive!