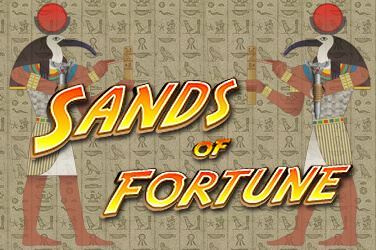 Brought to you by Eyecon Gaming, the Sands of Fortune Slot Game is a five-reel, three-row video slot which lets you embark on an epic adventure through the Egyptian desert. The mobile-optimised design allows you to play on both touchscreen and non-touchscreen devices without any difference to the overall experience.

With a Return to Player (RTP) of 93.76%, the Sands of Fortune Slot Game is considered a medium volatility slot, offering a balanced opportunity for decent wins across the nine winning ways.

The reels are positioned in front of an attractive hieroglyph-filled wall within the Sands of Fortune Slot Game, which boasts an Egyptian desert theme. It looks a little busy at first glance, but it works in conveying the overall Egyptian theme.

You’ll witness animated scarabs crawling around the screen, and can enjoy the accompanying soundtrack and sound effects, including the sound of a whip when each spin begins.

Symbols-wise, you may be surprised to find that the usual playing card royals aren’t the lowest paying of the Sands of Fortune Slot Game collection. Instead, the Egyptian silhouettes pay the least, followed by the scorpion, beetle, pyramid and eye of Ra. The highest paying symbol is the Sand of Fortune Jackpot icon, so watch out of this as you play.

The Sands of Fortune Slot Game’s minimum bet is set at a reasonable $/€/£00.09, which should attract newbies and casual slot players. The maximum bet is placed at just $/€/£13.50 per spin, so seasoned players and high rollers may choose to sit this one out.

Wilds, bonuses, and the special feature

The wild within the Sands of Fortune Slot Game doesn’t offer any payouts, but it will substitute for all other symbols apart from the bonus symbol which, in turn, can result in payouts.

Landing at least three bonus symbols on the same spin will result in activating the special feature. Once triggered, you’ll be presented with three corridors, and you’ll need to choose one. If your chosen passage reveals an artefact, you’ll win a cash prize. Keep an eye out for the skull symbol, as this will open a trap door and immediately end the special feature.

The Sands of Fortune Slot Game is a fair game, but it feels very simplistic compared to what we’ve seen with other video slots developed by Eyecon Gaming. The low number of features and complete lack of free spins causes a little disappointment, though there is the chance to win cash prizes through the special feature. With the low maximum bet value, we’d presume that Eyecon is targeting new and casual players with the Sands of Fortune Slot, and if that’s the case, the lack of exciting bonus games may not be too much of an issue. The interface is easy to use, and the design is good, though not the best we’ve seen in Egyptian-themed video slot games.

If you want something different why not search our archive or slots or take a look at Kitty Payout, 99 Time, Autumn Gold or Kingdom of Cash Jackpot.