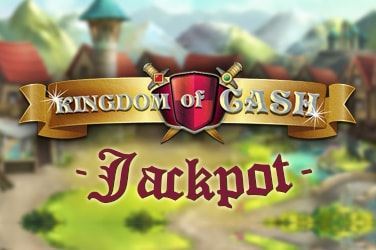 Kingdom of Cash is a video slot game from Eyecon that has a medieval theme. With some excellent graphics and gameplay, this game is a very good option for all sorts of slot game players.

You are taken to the Middle Ages, with the game taking place in a town nestled among the mountains. The artwork is pretty good and looks like a quaint painting, which only adds to the overall experience. The reels themselves are dark grey and appear as chunks of stone or granite, and are bordered by a thin grey border, with some intricate detailing at the four corners. All the symbols are quite well-drawn and look era-appropriate as well.

The game has five reels, three rows and 15 paylines. You need to land at least three matching symbols on a payline to trigger wins, with the betting range for this game from $/€/£0.25 up to $/€/£12.50 per spin.

The standard card royals are in place here, but they are quite well made and look as if they have been picked from books or writings from that era, although they are brightly coloured. The themed symbols include a knight in armour, a bearded courtier, a green ogre, a princess and a king, along with red and blue gems. The princess is the game’s Wild symbol and can substitute for all other symbols except the king Scatter, and any wins that include a Wild in the combination will automatically be doubled.

Landing at least three of the Princess symbols on the reels on a spin will trigger the Free Spins feature, where you will receive 10, 15 or 20 spins for having landed three, four or five of the Princess symbols respectively. All payouts during this round will be subject to a 3x multiplier, while the round can be retriggered as well, with a maximum of 400 free spins possible.

Landing three or more of the King Scatter symbol activates the Combat feature. You will be taken to a new screen and have to select a type of fight. If you win the fight, you will be taken to the next fight, with four of these in total, and each win giving you a 100x win.

This is a medium variance slot game with an RTP of 95.30%

This is a very good-looking slot game with some attractive features and a very impressive theme, so this is definitely a game to try out.