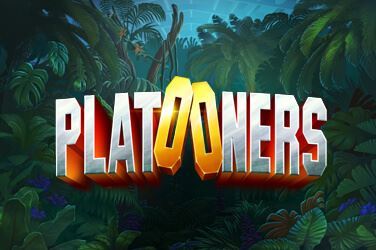 With a Return to Player (RTP) of 96.30%, the Platooners Slot Game is considered a medium to high variance slot, with the chance to win a top payout of 2,500 times your total stake across the 178 paylines.

The Platooners Slot Game features some impressive graphics with excellently smooth animations. The five-reel, four-row layout is positioned between two palm trees, with spinning reels outlined by film strips, and lights and cameras pointing towards all the action.

The Platooners Slot Game symbols include three soldiers – one green, one red, and one yellow – though they are only summoned when bonus features are triggered. Other symbols include army tags, binoculars, knives, and medic kits, in addition to the standard Royals. The wild symbol acts as a substitute for all other symbols, except for the Snakes of Fortune bonus scatter symbol. You’ll need to match three symbols as a minimum to land a win.

The three soldiers all interact in unique ways, randomly appearing and triggering bonus features. If the green soldier appears, you’ll see rockets launched at reels one and three, which will, in turn, be completed with the same symbol. Consequently, you’ll have an increased chance of landing a win across several paylines.

The red soldier will appear while throwing grenades, resulting in random wilds on the third, fourth, and fifth reels.

Watch out for the yellow soldier firing his machine gun at reels two, three, four, and five, generating a minimum of one five-of-a-kind winning sequence. This could include five bonus symbols, which would trigger the main Platooner Slot Game bonus feature, throughout which all three soldiers are active during free spins.

Platooners vs Snakes of Fortune

The key draw to the game is the Platooners vs Snakes of Fortune feature, triggered when at

least three bonus symbol land on the reels. The part starts with 15 free spins, with the soldiers taking turns to attack the snake. The number of attacks you begin with will depend on how many bonus symbols triggered the feature. If a snake is defeated, you’ll go up to the next level, resulting in more free spins.

The Platooners Slot Game is a great release, with the offer of decent payouts and an increased chance of landing them with the thrilling bonus features. The Platooners vs Snakes of Fortune bonus is the most attractive within the game, offering the opportunity to play out many feature-packed free spins. The theming is excellent, and the animations are incredibly smooth. Overall, ELK Studios have done a great job with this release, and both high-rollers and casual slot players should be able to get enjoyment from the game.

If you love Nyx titles, we have so many more to try. Check out these great titles Cygnus, Tahiti Gold, Jagrs Super Slot and Ho Ho Ho.