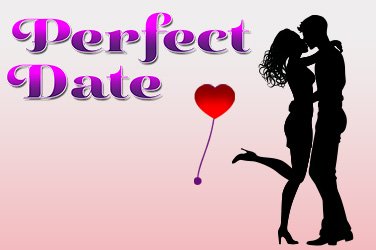 The perfect date is a very subjective thing, and you’ll probably get as many answers as you can find people to ask, but developers Genii games have had a stab at making one up for you in this slot.

There indeed appear to be a lot of the right ingredients present in this slot, including hearts and flowers and walks on the beach, sunset liaisons and evenings in Paris, but will you end up falling in love with this game, or will it get dumped? Let’s take a look at our Perfect Date slot game review.

We have to hand it to Genii, Perfect Date doesn’t hold back on any of the romantic clichés, using every element of the slot to add to the mushy theme. The background to the reels is a striking pattern in pink that incorporates rose petals, hearts and all manner of other symbols of love. It’s understated in comparison to lots of romance themed slots, but it looks cool and modern instead of hokey. This slot isn’t going to blow you away with its visuals, but the theme works well as a whole and is complemented by the symbols, which depict a man and a woman in various romantic locations like a beach or a restaurant at sunset. Unfortunately, the lower value symbols are all the generic 9 – A icons, but at least they have been given a pink-and-hearts paint job.

As you’ll see later this slot gets a little more risqué than many romantic slots can manage, but it plays relatively safe with its game mechanics, using five reels and three rows but throwing in 30 pay lines to play on. The payouts are pretty good but not incredible in the main game, and while the top-paying normal symbol does hit 1,000x your stake for five, most of the rest are hovering around the double digits range. Don’t worry though, because there’s an excellent jackpot to be had in the bonus round, where you’ll want to head as soon as you can, because you’ll need to hit those hard to beat the pretty low 94% RTP!

There are actually two wilds in this game, a beach scene which serves as a wild and a risqué looking shower scene that is called the extra wild (get it?). Both of these wilds pay nicely, with the normal wild paying 7000x your stake for five and the extra wild paying 2000x. You’ll also be pleased to know that there is a scatter symbol two, represented by the couple in Paris, which can give you up to 20 free spins during which all of the prizes are doubled. On their own, these are all fun but pretty low key bonuses but land a combination of the two wilds we’ve talked about in the free spins and you’re talking some seriously impressive multipliers and some big prizes! There’s even a random jackpot of 70,000x your stake in the main game, though sadly it doesn’t double in the free spins round and you have to be playing at the maximum bet to stand a chance of winning it.

We freely admit that the theme of Perfect Date isn’t for everyone, and while we don’t mind a romantic slot here and there, this one was a bit mushy even for us. What does appeal to everyone is wads of cash, and the Perfect Date slot game has those in spades! Generous bonuses and a mind-blowing random jackpot you can win in a single spin should have you falling in love, however, you feel about the theme!

The perfect game is just around the corner with Double Bonus Poker, Joker Poker and Aces and Faces.