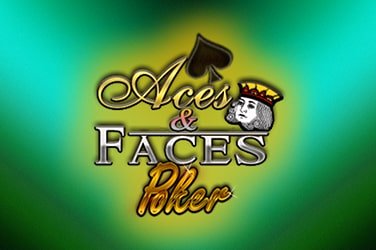 Aces & Faces is one of those rare things in life: a successful comeback. Based on the old-style video poker game Jacks Or Better, Aces & Faces started life back in the 70s and 80s when the very first video poker machines were making their debut in land-based casinos around the world. Soon superseded by arcade machines and more sophisticated slots, video poker still has a place in many people’s hearts, and Microgaming have released this version to try and hit the nostalgia sweet spot.

So is this game a blast from the past or a bad memory? Let’s take a look in our Aces & Faces review.

While the mechanics of the Aces & Faces slot game are quite different from what you might be used to, the overall idea behind it is similar to a slot machine but with an added tactical edge. Just like in a slot, the machine spins and randomly draws you a hand of five cards. Now comes the tricky part. If you know your poker you may already be able to tell how strong your hand is, but inexperienced gamers may want to consult the massive paytable provided to tell you what all the hands mean. Then, depending on how strong your hand is, you can choose which cards to keep and which cards to spin again. Spinning again pays out whatever you won on that hand while randomly selecting new cards in place of the ones you rejected while keeping the ones you wanted to hold where they are.

Slots players may already be salivating at the thought. Imagine being able to decide which symbols you want to keep and which ones you want to ditch! This mechanic means that the slot has a very high RTP of 99.26%, but it also means you may find it hard to make serious money if you don’t bet aggressively. You can bet between one and five coins, and the maximum you can make with one coin is 500 times your stake for a Royal Flush, so you’ll need more coins in play to hit the top jackpots. With five coins you can score 4,000x your stake with a Royal Flush, but at the risk of more money.

Visually the game is pretty simple and contains none of the design flourishes you would expect from modern games. Aside from the images of two kings at either side of the cards and the colourful background to the slot, there are no graphics at all, though what’s on display looks bold and well-drawn. The chances are that real poker hustlers aren’t there for the pretty pictures anyway!

There aren’t any specific bonus rounds that you might expect from a modern slot game, but there is a ‘double or nothing’ style game where you’re challenged to beat the dealer. It’s as simple as it sounds, a mini-game in which you pick one of four cards and hope that it’s better than what the dealer draws, but has the potential to make you much richer with little effort.

Aces & Faces is an exciting take on the slot genre that is fun and refreshing if you’re used to the randomness of modern slot games. There’s a simple strategy at play here, just like real poker, so it’s the perfect game if you want to feel like a master of your destiny. However, making serious cash is challenging and risky in this game due to the amounts you need to bet, so it may not be for the faint of heart!

Are you looking for some other titles by Genii? We recommend the following titles Tanzakura, Age of Spartans, Throne of Gold and Aladdin’s Loot.