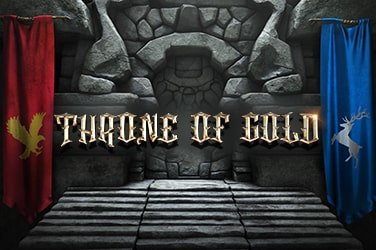 The art of a great fantasy slot stems from its ability to not only excite the viewer – but also to give them a twist on the storylines they’ve heard so many times before. The Throne of Gold slot by Saucify aims to accomplish both of those goals with a tale that sees a kingdom torn in half by two houses – seemingly taking some inspiration from Game of Thrones.

Today, we’re going to see whether their hard work has paid off.

There’s a gritty element to this game that is evident from the word go, with it quickly becoming apparent that this isn’t going to be a walk in the park. The 5×3 reel layout is set up nicely and gives both the board and the backdrop room to breathe, which makes sense, given that there are 20 fairly standard paylines on offer.

The usual play cards appear in a nice themed manner alongside a whole host of themed symbols including medieval numbers such as a knight, a dragon egg, an eagle and the Throne of Gold itself.

The return to player (RTP) percentage is integral for most hardcore slot players out there and the same is true for the Throne of Gold slot game with the reported RTP rolling in at around 96% which puts it on the lower end of the spectrum, and slightly below average, but the medium volatility should ensure a steadier stream of winners – even if the payouts are a bit lower.

Players don’t have to break the bank to get started but they can go all the way up to a maximum stake of $/€/£50, and from there, the belief is that you could win more than 2,000 coins if you’re feeling lucky enough.

Visually speaking this game does move a bit too slowly for our liking at times and while the attention to detail is admirable, things can tend to feel a bit clunky from time to time.

The wild symbol, which is the fire-breathing dragon, is one you’ll want to keep an eye out for as it can substitute itself for all other symbols outside of the scatter (the golden throne). If you land five of them during the Free Spins feature, that could get you to the very top of the earnings list. In the aforementioned feature, you could receive between 7 and 20 free spins depending on how many scatters you land.

The Throne of Gold slot game may overdo the theming just a touch, but the tip of the cap that they give to Game of Thrones is bound to draw people in. The figures with regards to the money you could win aren’t exactly overwhelming but again, as long as you’re having a good time and you’re following the story with some level of enjoyment, that’s all that really matters.

Slots are meant to entertain, and Throne of Gold manages to do that in its own special way.