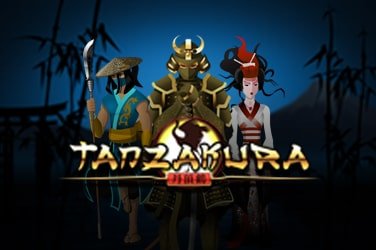 In order to investigate our future, we must first explore our past. There are many time periods that continue to be shrouded in mystery even to this very day, and today, we’re going to explore the medieval history of Japan.

We’re going to do so through the Tanzakura slot game by Saucify which, it’s safe to say, has plenty to offer based on our first impression.

The standard 5×3 reel layout allows the background to really breathe and give players a chance to take in the scenery of this theming, but they must still be aware of the fact that there are 50 paylines to try and work your way through from beginning to end.

Temples, swords, birds, knives, flowers, leaves, nunchucks and so much more appear on the reels with the symbols seemingly getting more and more complicated as we go on.

The return to player (RTP) percentage is always going to be an important piece of the puzzle for players and the same is true for the Tanzakura slot game, with the reported RTP coming in at 95.84%. That’s below the standard industry average but with medium volatility, there’s a chance you could end up with a steadier stream of smaller wins – depending on how patient you are.

You can begin your journey with a nice minimum stake of $/€/£0.10 and a maximum of $/€/£62.50, which will hopefully lead you down the path of maximum winnings that can increase to £62,500 which wouldn’t be too bad for an afternoon of work.

The theming is really crisp here and between the tension-building soundtrack with the attention to detail, we really do feel like Saucify have come close to hitting a home run – if only it wasn’t quite so clunky.

They can all substitute themselves in place of any other symbols – outside of the scatters. You have the temple scatters which can trigger up to 16 free spins, the bird symbol which can unlock a bonus game, and the possibility of some multipliers being uncovered through the initial wilds.

The Tanzakura slot game is a little bit wild (pardon the pun) and some will argue they attempt to throw too much at the wall, but we’d say it gets away with it. The bonus features aren’t great but the characters and symbols involved really do try their best to tell a story, and there’s a clear direction for you to aim for with the winnings that are on the table.

There’s work to be done, but we still enjoyed it.