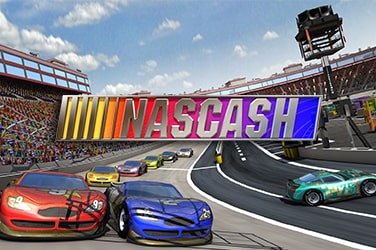 Despite being a big deal in the US, NASCAR doesn’t exactly have a massive following in the UK where Formula 1 and off-road racing are much more popular. But one advantage that Nascash by Saucify has over its rivals is the potential for big cash wins while you watch the action.

Just like its real-life counterpart Nascash is big, brash, bold and as high octane as they come, so will you turbo-charge your finances with a few laps of this slot, or will you be all in a spin? Let’s take a look in our Nascash review.

One thing is for sure, you won’t be unsure of which sport you’re watching when you kick this slot off. Loud music and frenetic 3D race animation growl into life before you’ve even begun the game, and that just sets the tone for the rest of the bright and bold colours on display in the game design and symbol choices. Gratifyingly there are no generic symbols on display here, and from the fire extinguisher to the wheel gun, the hot dog and the oil can there are all sorts of NASCAR paraphernalia that can add to your cash kitty. The background of this slot is a gorgeous racing scene that takes in the swirling crowds in the stands, the brilliant blue sky above a baking hot tarmac surface and the roaring cars as they pass by, and all of this combined really helps to set the scene and draw you in even if you don’t know the first thing about the sport.

However, despite all this sound and fury in the graphics and sound, the game itself is actually pretty straightforward. The layout is a standard five-reel, three-row grid with 25 paylines while betting ranges from 1p all the way up to £/€/$0.25, which isn’t exactly a massive maximum. On top of the regular symbols there is also a wild and a scatter, represented respectively by a racing driver and a racing car, the first of which is able to substitute for other symbols and the latter which is used to trigger the bonus rounds. Overall the RTP is a pretty miserly 93.3% so you’ll want to get into the bonus round early for a chance to beat the odds.

Luckily there’s nothing especially complicated about the bonuses, which are reached simply by landing three or more racing car scatters. There are actually three bonus rounds that are activated by landing three, four or five scatters respectively, resulting in three potential bonuses: three free spins with a 3x multiplier, six free spins with a 4x multiplier or 15 free spins with a 2x multiplier. Each bonus round is accompanied by a unique animation that brings the whole thing to life and makes it more interesting, but ultimately it is a fairly basic free spins round. The female reporter symbol pays best, with a 10,000x bonus available if you land five of her.

You could be forgiven for thinking that the Nascash slot game is like NASCAR: Lots of pomp and pageantry for something a bit too simple. Ultimately NASCAR is just a lot of going round in circles. While this game doesn’t have much to offer beyond the simplistic bonus rounds. However, it does it in style. If you’re after a lucrative but easy to follow slot that’s still entertaining, this is for you.