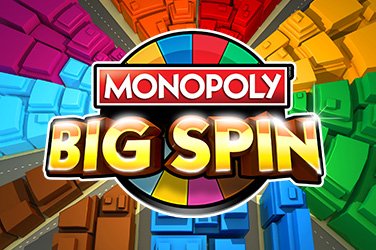 You could be forgiven for thinking that you’d clicked on the wrong game when you first start playing Monopoly Big Spin because it bears more than a passing resemblance to Roulette on first glance. Don’t worry though, it’s just a clever new mechanic that takes the best of board games and slots and packs them into one fun and engaging game.

There are also some generous prizes coming out of ‘Uncle Pennybags’ deep pockets, so what are you waiting for? Let’s get spinning in our Monopoly Big Spin slot game review!

Monopoly Big Spin is very different to the majority of slot games out there, so we’ll take you through the visuals first. The main feature is the big wheel in the centre of the screen featuring Uncle Pennybags, which substitutes for the dice from the real-life game and functions much like a roulette wheel. The Screen is pretty abstract but looks like a 3D street scene seen from above, surrounded by buildings that are the colours of the different streets in real Monopoly. That’s about it in terms of what the game looks like, except to say that the graphics are pretty well rendered and colourful if a bit basic.

At the bottom of the screen of the slot, you’ll notice that there is a small table detailing the payouts for landing on the different colours, which correspond to the different coloured streets in the game, with brown being the lowest payout and royal blue being the highest. Rather than using paylines as you would in a traditional slot the betting element is much more like Roulette as well, requiring you to put physical chips on the different sections in the paytable or the table of special squares that you’d like to bet on. Spinning the ‘reels’ spins the big wheel, which then stops on one of the coloured sections or on the special tiles, which lets you know whether you’ve won. The highest win in this section of the game is the royal blue which pays 25x your stake, while brown only pays 5x, for an RTP of 95.75% You can place bets on as many or as few elements as you’d like, or on everything, which is the equivalent of maxing out your paylines in a traditional slot.

We’ve mentioned the special tiles a couple of times, so let’s look at what they do. If you’re familiar with Monopoly you’ll recognise these symbols, including favourites like Community Chest and Free Parking. These are a nice touch that connect you instantly with the original game, and they pay well too: railroads and the utilities pay out 12x your stake when you land them, while Free Parking and Go pay 30x and 40x respectively while granting free spins. Land on Community Chest or Chance and the wheel transforms, replacing the streets on the surface with various images of Uncle Pennybags living it up, while a new paytable appears to the side to tell you what landing on each of the new symbols mean. Once again they’re all linked to real cards you can get in Monopoly, like getting an inheritance and winning a beauty contest, and can pay anywhere between 5x and 200x your stake.

The Monopoly Big Spin slot game is a fun and interesting take on a familiar game, using new mechanics to shake up the format without springing anything too revolutionary on us. The bonuses are frequent and can be pretty generous, but the payouts in the main game are pretty low, so you’ll find yourself leaning heavily on the bonuses to make any money.