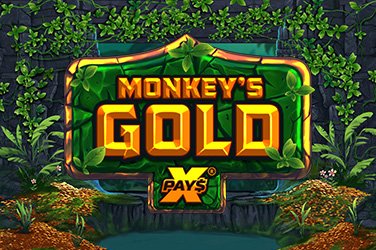 It’s a jungle out there, but for all the danger of the deep, dark forest there is also the opportunity to be found among the trees. Monkey’s Gold xPays is set in a ruined jungle palace lorded over by the king of the monkeys, and it’s up to you to match the symbols and claim the treasure.

Sounds simple? Well, this is the kind of treasure hunt you won’t forget in a hurry. So will you master the mechanics and win your riches, or will you get lost among the trees? Let’s take a look at our Monkey’s Gold xPays review.

There’s no mistaking a Nolimit City slot thanks to the amazing attention to detail we’ve come to expect from the developers, and the Monkey’s Gold xPays slot game is no different, thanks to some excellent art and design. The jungle palace is brought to life by the huge stone heads flanking either side of the reels, while the jungle canopy above is full of lush and thick vegetation. The symbols look fantastic and there are some great animations and sound effects to back them up, as symbols crash in with puffs of smoke or disappear in a shower of sparks, all while some energetic drumming functions as a soundtrack. The symbols are a strange mix, including gems and card suits set in stone alongside strange carved heads that resemble Hindu and Thai icons.

Monkey’s Gold xPays is based around the xPays system developed by Nolimit City, though initially, it appears to be your standard cascading reels system, that all changes when you hit some wins. In this system, you generate wins by landing three or more symbols in clusters, and at that point, all the rest of the symbols disappear to be replaced by a whole new batch, which happens over and over again until no new combinations land on the screen. None of these symbols are worth a huge amount, and in fact none are worth even 1x your wager, but that’s because the real money is made when you apply some of the amazing bonuses this game brings to the table. The RTP is just above average at 96.02%, and with a max bet of £/€/$100, the stage is set for some big wins!

Monkey’s Gold xPays is all about the bonuses as we say, and there sure are a lot of them. Some of them are to be found in the main game, like the symbol upgrade function, which happens whenever you manage to fill a row with completed combinations, and upgrades all the new symbols to higher-paying replacements. You even get a bonus multiplier added to the highest paying symbols that can’t be upgraded! Colossal symbols also play a big part in adding to your wins, dropping in randomly as part of any cascade and appearing as large as 3×3 symbols in size, coming with a multiplier up to 500x your wager. Not only that, but they also fill in any gaps these symbols create in the reels with wilds! Finally, the free spins bonus can be activated by landing three or more scatter symbols, awarding you up to 16 free spins. These free spins come with a random increase to the win multiplier after every spin, determined by a dice roll.

Monkey’s Gold xPays is a natural breath of fresh air, bringing a whole host of new mechanics to the table that is as fun as they are profitable. The symbols don’t pay well at all taken on their own, but with the benefit of the fantastic bonuses added on, you can suddenly find yourself making huge wins. Include the great theme and lovely design into the mix, and you’ve got an instant classic.

If you’re looking for gold, we have many other slots to choose from, such as Red Chilli Wins, Good Fishes, Multiplier Man and Squish.