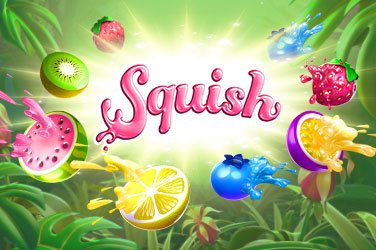 There are some slots that are so utterly charming and relaxing that you almost don’t want to critique them for fear of backlash – but such is the nature of the industry.

The Squish slot game comes across as the cutest thing to hit slots in years, and we’re going to try and figure out whether that truly is the case.

The stunning Squish slot game opens up in a unique way by having the reel layout set up as 6×6, which is immediately going to catch many folks off guard, as is the nature of the wins which all come in the new cluster format.

The symbols are pretty gorgeous, it has to be said, with the following making regular appearances – strawberries, blueberries, watermelons, kiwis and more.

The return to player (RTP) percentage is always going to be integral to someone out there, and the same is true for those who wish to play the Squish slot game. The reported RTP comes in at 95.62% which is below the standard industry average you’d expect, but with high volatility, you should still expect a pretty lively experience.

Punters only have to put down $/€/£0.20 if they want to kickstart their Squish journey, riding up to a conservative maximum stake of £20. From there you’ll want to keep your eyes peeled for those blueberries as landing enough of them could give you up to $/€/£5,000.

From the background design work to the smoothness of the gameplay to the attention paid to the symbols on the reels, we have so much to say about the visual appeal of this slot. It’s stylish and it’s slick which, when put together, are two assets that can’t be understated.

The game doesn’t actually come with a wild symbol which means the only time substitutes are made is when you land a six-symbol win, which causes four ‘wilds’ to be placed on the reels – which will stay there for 10 spins.

If you land four or more of the same fruit then the Extra Juice feature leads to what is essentially a respin, whereas the Blend symbol can squish fruits together when five of the same fruits pop up on the grid. Thanks to the gameplay, though, it doesn’t need a whole lot else.

The Squish slot game is just so much fun to play and because of that, they’ve clearly not felt the need to go above and beyond on the bonus features. They allow the design work to speak for itself and even though that could easily be viewed as a detriment, they seem to pull it off quite nicely.

The potential payouts could and probably should be higher but as an experience that is going to get you pumped up for some slot gaming, Squish manages to execute the majority of its key components with flawless ease.