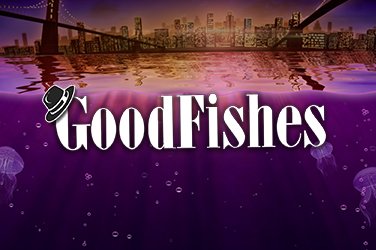 We like a parody slot as much as anyone, but this time Revolver Gaming may have gone too far. Say hello to GoodFishes, a loving homage to the 1990 gangster flick Goodfellas populated entirely by anthropomorphic fish!

Every gangster stereotype you can imagine is there, from the wide-brimmed hats and sunglasses to Tommy guns and cigars, but they’re all being used by fishy friends from under the sea in this amusing game that gives sleeping with the fishes a whole new meaning! So will you get made, or will you get concrete boots? Let’s take a look at our GoodFishes slot game review.

While it may be hard to take this slot seriously we urge you to keep a straight face as best you can, because there are some decent prizes to be won in the GoodFishes slot game! The action takes place in and out of New York’s Hudson River, with the Big Apple’s iconic skyline visible in the background while the foreground is covered by the murky depths. The low-value symbols are the generic 9 – A, though augmented with iconic gangster accessories like cigars and hats, while the fishy felons themselves make up the higher value symbols. A jazzy vintage soundtrack and suitably watery sound effects make up the rest of the theme, which to be fair ends up being pretty funny to watch.

Just like the real mafia, there’s a lot of risk associated with getting into bed with these fish, but there are also massive rewards to be had too, and GoodFishes isn’t shy about handing out the big prizes. There are four rows and five reels to play on with 30 pay lines, and even the lowest-paying fish symbol can net you 1500x your stake for five, while the big boss fish at the top can net you 4000x. That’s nothing compared with the clam wild though, which sits pretty with a prize of 10000x as the top earner in GoodFishes! The prizes are good when you can land them, though the high volatility nature of the game means that won’t be every spin, so all in all the RTP comes out about average at 95.95%

To help you beat those odds there’s even a bonus game hosted by the mob’s enforcer Frankie the Fishmonger, who is a nasty looking shark. Choose one of his three unhappy victims to reveal one of six bonus games, three of which are just fewer spins with a bigger multiplier or more spins with a smaller multiplier, though there are three games that stand out: The big catch randomly adds bars to each different fish symbol as you spin, giving you free spins until all the different types of fish symbol are locked up; Both Ways gives you ten free spins in which symbols pay both ways, while Sticky Wilds gives you wilds that stick to the reels as you spin.

GoodFishes is a zany looking slot with a fun and original theme, if you can keep a straight face, that also hides some pretty epic prizes. It can be unforgiving, just like the real mob, but play your cards right and hit those bonuses well and you could be in for some seriously big wins!