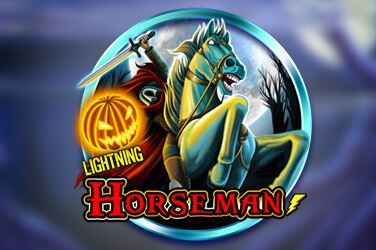 Developed by Lightning Box Games, the Lightning Horseman Slot Game is a horror-themed video slot with an exciting bonus feature. The interface is mobile optimised, so you can choose to play on your computer or mobile without affecting the overall experience.

With a Return to Player (RTP) of 95.52%, the Lightning Horseman Slot Game is considered a medium to high volatility slot, with four in-game jackpots to watch out for. The biggest jackpot is worth a whopping 1,250 times your total bet value.

The Lightning Horseman Slot Game is centred around the Headless Horseman tale, with a few notable differences to make it a little less gruesome. The Lightning Horseman himself carries around a Jack-o-Lantern (opposed to a head as in the original story), making this a great game to get in the spooky spirit of Halloween.

Symbols-wise, you’ll find the horseman himself, as well as the lightning bolt, ravens, barns, and other characters from the story. There are also the usual playing card Royals.

The reels form a five-reel by three-row layout, with a total of 40 paylines in play throughout the game. There’s no progressive jackpot, but the four in-game jackpots mentioned earlier make up for this. The lowest of the four is the ‘Mini Jackpot’, offering 2.5 times your bet. Next, the ‘Minor Jackpot’ provides 25 times your stake, while the ‘Major Jackpot’ pays 125 times. The ‘Grand Jackpot’ is the one to watch out for to walk away with winnings of 1,250 times your total bet value.

The wild symbol within the Lightning Horseman Slot Game is the horseman, who is also the highest-paying symbol across all of the standard icons, paying 600 times the bet value. It’s most useful when acting as a substitute for all other symbols, though it won’t replace the scatter.

Speaking of the scatter, it’s represented by the lightning bolt symbol, and it can land in several positions on each reel. At least six are required to activate the respin feature, which gives you an initial three respins while locking in all of the triggering scatters. The key is to land extra scatters, which will also lock in place while the respins restart. Once all respins have been exhausted, the lightning bolts will reveal prizes.

If you’re on a winning streak and manage to complete the reels with 15 lightning bolt symbols, they will all reflip, rewarding you with 15 prizes.

If you’re on the lookout for a spooky yet straightforward slot, the Lightning Horseman Slot Game may be for you. The design is great, and the respin feature with sticky scatters is an excellent opportunity to lock in some significant wins, as do the four fixed jackpots.

If wild horses wouldn’t drag you away from Casino77, you may want to try some of our other slots such as Hit it Hard, Fruit Collector, Mega Cherry or Witch Doctor Goes Wild.