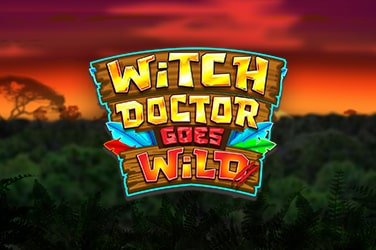 There’s magic in the air in the lair of the Witch Doctor, and he’s using his most powerful spells to conjure up some amazing prizes that are sure to fill your wallet with cash! Help this excitable little fellow gather the symbols he needs to magic up some special wilds in this cascading reels slot, and your wins will just keep getting better and better as they build.

The Witch Doctor Goes Wild slot game is a title by CORE Gaming, a London-based studio with a long roster of games to their name, and we have to say it’s quite an original theme. The Witch Doctor stands to the top left of the reels and is quite animated throughout the game, occasionally dancing around and performing spells as you make combos. The graphics are a bit different with drawn symbols and pixels, but the theme is well fleshed out with a jungle temple in the background and themed high-value symbols. These include a tribal shield, a bubbling cauldron and a skull totem, while the low-value symbols are made up of the generic 9 – A. It’s quite fun when the reels go up in flames and when the blocks explode, while the tribal soundtrack is atmospheric.

The wild is a very important symbol in this game, represented simply by the word wild, and it transforms as you win. This game operates a cascading reels mechanic, so winning combos are destroyed and replaced with new blocks, so you can win over and over again in the same spin. Each successive cascade win you achieve upgrades the wilds in the game in line with the bonuses listed on the left, giving you different prizes as you advance through the eight steps, including turning symbols into wilds, creating bigger wilds or taking over reels with wilds. In terms of the maths behind this game, bets range from £/€/$0.40 to £/€/$100, so they’re fairly generous while the RTP sits at a below-average 95.14%.

The wilds are the key to winning in this game, so it’s no surprise that they get an upgrade in the bonus rounds. These are activated by moving to the 8th tier of the wilds table, which grants eight free spins to the player. These spins are like the spins in the standard game, except new wilds are added to the reels after every spin. Every win grants you an extra free spin to add to the list, and a new type of symbol appears. These multiplier blocks randomly add a multiplier of up to 70x to your wins, and all other subsequent wins in the same cascade!

Witch Doctor Goes Wild really succeeds when it is at its most volatile, like the little dancing Doctor in the title, and the game can flip in a second if you happen to land a powerful wild or set off a lucrative cascade. It’s not much to look at compared with modern games, and the prizes aren’t massive, but it’s certainly fun and exciting to play.