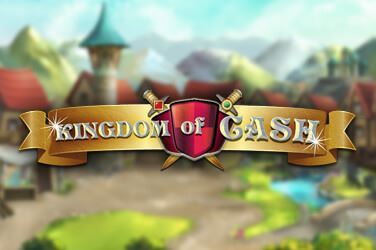 There’s something about the magic, mystery and mayhem of medieval Europe that makes it sit perfectly as a setting for slot games, whether they choose to pick a fantasy theme or stick to historical fact.

Kingdom of Cash is definitely on the fantasy end of that spectrum, introducing us to a colourful world of wizards and goblins, as well as a princess to be rescued and a mountain of treasure to be won! So is this a magical experience? Let’s take a look in our Kingdom of Cash slot game review.

Far from the gritty realism of modern medieval adaptations, this game looks far more like something Walt Disney might have dreamt up, with a backdrop characterized by sunlit meadows and thatched cottages with a turreted castle in the background. The art style is bright and cartoonish, while the high-value symbols are populated by a traditional cast of heroes and villains, including a wise wizard, ghoulish goblins, an innocent princess and a powerful king. Sadly the lower value symbols are made up by the generic 9 – A symbols, even though they’ve been given a colourful fairytale makeover. A placid soundtrack accompanies your spins as well as some relevant sound effects, which help build the atmosphere.

The mechanics behind the game are traditional enough as well, with the playing area boasting five reels and three rows with 20 paylines between them. What might interest you is the potential prize fund, which is pretty generous in the Kingdom of Cash slot game: Even the low paying symbols attract 300x your stake for a row of five, while that figure jumps up to 5000x for the highest paying knight symbol, so you don’t have to worry about getting paid with this game! That’s borne out by the fairly standard RTP of 95.14%, putting it about average compared with other slots. There are also two wilds to look out for, the king and the princess.

Both of these wilds will be of great interest to you because they also function as scatters, as well as rewarding you with powers of their own. For example, the princess wild is able to substitute for other symbols and doubles the value of the win she participates in, while five of her on a line wins you 25 free spins! Similarly, the king wild opens up a mini-game when you collect three or more of him, which allows you to choose a fighter and participate in four rounds of simulated combat where each awards a prize. You can trigger these features over and over again, so there’s no limit to your enjoyment of the bonus rounds.

The Kingdom of Cash is a surprising little gem of a game that offers great graphics and great gameplay in spades. The theme may be a little childish for some, but there’s no denying that it looks great, while the bonus rounds are both rewarding and varied enough to be of interest for any player level. The payouts are also surprisingly high for such a cutesy slot, but we’re not complaining!

If you’re looking for something different to play, why not try some slots from Nyx. We have Centurion Slots Free Spins, Atlantis City of Destiny, Shamrock Lock and Faerie Nights.