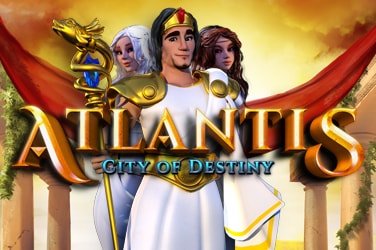 Powered by Inspired Gaming, the Atlantis: City of Destiny Slot Game is, unsurprisingly, set within the mythical city of Atlantis. The five-reel, four-row, fantasy-themed slot has 20 fixed paylines and offers wins worth up to 500 times your total stake. The game is compatible across all devices, thanks to the fully optimised design.

With a Return to Player (RTP) of 95.00%, the Atlantis: City of Destiny Slot Game is considered a medium volatility slot. Players can expect regular wins throughout the game.

Take a trip to the bottom of the ocean to uncover treasure in the famous lost city of Atlantis with this slot. The design is fantastic, with clear and high-definition graphics and what appears to be an ancient temple standing behind the reels. The colours are vibrant, and the soundtrack helps to create an exciting atmosphere.

In terms of symbols, you’ll find the usual low-paying playing card royals – J, Q, K and A – alongside higher value symbols such as a temple, a golden cup, a ship, swords and the Atlantis: City of Destiny Slot Game’s logo. The fireball is the wild within the game and can be clearly identified as it is labelled as ‘WILD’. It can replace all other symbols to form winning combinations, except for the bonus icon.

The Atlantis: City of Destiny Slot Game’s minimum bet is set at a low $/€/£00.20, whilst there is an upper bet limit of $/€/£250.00. Given the extensive range of available stake options, the game should appeal to new and seasoned slot players alike.

The bonus selector can be activated by landing three bonus symbols in any position on the first, third and fifth reels. Once you’ve done this, you’ll have the chance to roll a dice to determine which one of the three bonus features will come into play. They include:

Fortuna Spins. Players will need to spin a wheel to reveal how many spins, what multiplier and which extra wild symbol they can continue to the round with.

Atlantis Wild Spins. This feature will reward players with four spins, each with two sticky wilds added to the reels throughout.

Pathway to Riches. Players will make their way up an ornate staircase, picking prizes along the way. If players make it to the top, they’ll be rewarded with either the Fortuna Spins or Atlantis Wild Spins feature, too.

There’s also the possibility of reel modifiers enhancing the gameplay. The Lady of Atlantic can randomly appear during any spin to reward players with one of the following four features:

Gigantic Reel. This will add one oversized 3×3 symbol to the reels for the spin.

Super Bonus Reel. Extra bonus symbols will be added for one spin.

Wild Winner. Wilds will be added for one spin, guaranteeing wins of at least six times your stake.

The Atlantis: City of Destiny Slot Game is a fantastic slot with a visually pleasing design and excellent graphics. There are plenty of bonus rounds and features to keep entertainment levels high throughout the game, with the chance to land some impressive wins and multipliers.