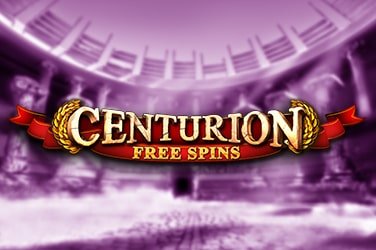 Make a play for the riches and glory of Ancient Rome in this slot, and help our plucky centurion win a fortune! Centurion Free Spins is all about celebrating the exciting side of the Roman Empire: Chariot races, gladiatorial contests and the ever-present Roman army as it conquers its way through Europe.

Will you join our hapless centurion in a Roman triumph, or will you be fed to the lions? Let’s take a look in our Centurion Free Spins review.

The Centurion Free Spins slot game certainly doesn’t skimp on the bombastic imagery, and you’ll feel like the emperor himself when you play. The reels are set on a royal red background, and with every spin, a fanfare of trumpets rings out. This is cleverly set up so that each spin sounds like the continuation of one, long fanfare, so it almost sounds like it’s responding to your game. It’s subtle, but it adds a touch of grandeur to proceedings. While the low-value symbols in this slot are the generic 9 – A icons, the high-value symbols are lovingly rendered images that are typical of ancient Rome: A soldier’s helmet, an amphitheatre, a silver Denarius, a chariot, and a pair of crossed Gladii over a soldier’s shield.

So this game definitely looks the part, but how does it play? Well in terms of the mechanics it’s all pretty straightforward, with five reels and three rows as well as 20 paylines in play. Where it starts to get interesting is in the betting limit, which ranges between £/€/$0.25 and a whopping £/€/$250 per spin, probably what contributes to an RTP of 95%. So while the coin payouts aren’t exactly huge, topping out at 500x your stake for five of the game’s logo, that’s a lot of money if you placed the maximum bet!

A lot of this game’s bonuses are randomly activated rather than ones that you ‘earn’ by accumulating symbols, which can be good and bad. On the one hand, your winnings aren’t dependent on landing symbols but on the other, you can feel less in control. The main free spins game is activated by landing between three and five centurion free spins symbols, which wins you between 9 and 16 free spins, with extra wilds and new stacked wilds that give you more wins. You can also opt to place fortune bets, which are double the normal bet but give you even more potential bonuses and thus more potential wins.

While this is the only special bonus round, there are a handful of other bonuses that are randomly activated in the main and bonus games. These bonuses range in effects from adding more wilds to the screen to a guaranteed five symbol combo, or even special giant symbols added to the reels. All these are random, so there’s no strategy to gaining them, but it all adds a bit of random excitement to the mix.

Centurion Free Spins is a good looking and fun slot that makes good use of its Roman theme. There’s nothing particularly stand-out about it, but the high betting limits mean you’ll be able to play like a high roller, while the random bonuses awarded can seriously boost your prize fund.