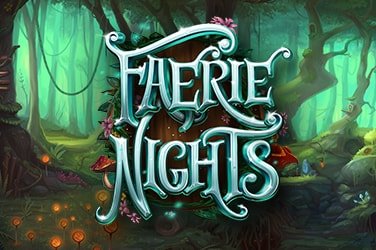 Dare you go down to the woods at night? The legends say that the faeries have the power to make your wishes come true but upset them and you may have an eternity to regret it! Luckily the stakes aren’t as high in this slot, and you’re unlikely to get turned into a frog, but there are still hefty fortunes to be won if you dare to play!

Faerie Nights is equal parts fun, exciting, enchanting and mystifying, but will you meet the Faerie Queen or suffer her curse? Let’s find out in our Faerie Nights review!

Faerie Nights does a fantastic job of capturing that eerie, otherworldly feeling with its artwork. These aren’t the cutesy faeries of storybooks, and the twisted trees, glowing toadstools and strange lights of the backdrop have their fair share of menace about them. The Reels themselves are made of twisted vines while flowers grow on the corners and little faerie houses glow in the woods behind. The symbols themselves are just as creepy, with the low-value symbols being formed of the 9 – A images made out of gnarled roots. The high-value symbols show a little more promise, however, being represented by beautiful glowing butterflies, mushrooms and flowers, alongside fantastic pixies and unicorns. They are really well-drawn and rendered and do a great job of bringing this slot to life.

Underneath all this mystery, the game is actually pretty generous with its cash. It’s a standard five-reel, three-row layout with a betting range between £/€/$0.25 and £/€/$100, and while the most you can win on one spin is 1,000x your stake that translates to a massive £/€/$100,000 and a 96% RTP. Another symbol to watch out for is the tree wild, who comes to life when he lands on the reels and stands on magical legs to expand and fill the whole reel.

The scatter in the Faerie Nights slot game is the Faerie Queen of the Day, and finding between three and five of her will allow you to meet her lesser-spotted sister, the Faerie Queen of the Night. It’s hard to tell, but it was a day in the gloomy forest when you started, and entering the bonus round shifts you to a scary night time scene under a full moon. The forest changes to a spooky, moonlit scene where the glowing mushrooms and strange lights stand out even more. The Queen of the Night replaces the Queen of the Day, becoming a scatter that doubles wins when she’s on the reels. The Walking Tree wild becomes a Will ‘o the Wisp, a glowing trickster spirit, who is sticky and stays on the reels when it lands. It’s a spooky transformation, but it’ll be great for your pockets!

Faerie Nights is a great looking slot with a surprise twist in the bonus rounds that turns the game on its head and makes for some lucrative prize opportunities. It’s not a cutesy fair game, so you may be a bit surprised at how dark this game gets, but it pays so well that you won’t care!