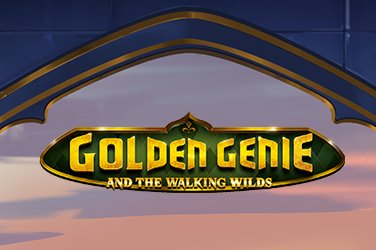 For obvious reasons slots, games try hard to remind us of riches, adventure, mystery and opulence, and it’s hard to imagine a setting that captures all of these better than the Arabian Nights tales. The story of how Aladdin rose from thief to prince with the help of a magical genie is a well-used tale in slots games, but it’s hard to remember a version that looks as good as this one by No Limit.

Gorgeous design, entertaining mechanics and amazing jackpots all add up to one great experience, but will you end up king of thieves or fresh out of wishes? Let’s take a look in our Golden genie and the Walking Wilds review.

The Golden Genie and the Walking Wilds slot game makes great use of the latest technology to bring to life a series of complicated mechanics through the use of gorgeous art, exceptional animation and amazing design. While the low-value symbols are represented by generic 10 – A symbols, the high-value symbols are exceptionally detailed depictions of Aladdin, the princess, a tiger and a cobra. The starry Arabian sky forms the backdrop, while fluffy clouds occasionally float into view behind, and every win is celebrated with a firestorm of lights and colour as well as some well-designed animations.

Golden Genie and the Walking Wilds is one of those slots that holds its main action back for the bonus round, so the basic game is fairly pedestrian, with a standard five reel and three-row layout and a max/min bet of £/€/$100 and £/€/$0.20 respectively. This all adds up to a decent RTP of 96.03%, if you can manage to break into those bonuses. One trick the game does have up its sleeve in the main game, however, is the magic lamp stacked wilds feature, which randomly turns reels 2 and 4 wild for a spin.

One feature gamers will be pleased to learn about is that the first of the game’s bonus rounds doesn’t even require you to collect scatters as usual. All you need to do to get at the Genie Wishes bonus is have a lamp symbol land to the left of an Aladdin symbol on the reels, which gives you one free spin in which all Aladdin and lamp symbols are wild. You also play with a randomly selected multiplier up to 10x.

The Genie wild is unusual in this game in that it also acts as a scatter, and you need three or more to trigger the main bonus game after which the slot was named. When the feature begins, you get unlimited free spins as long as a genie remains on the reels, and after each spin all the genies process one reel to the left. One of these genies is golden, and its multiplier increases by 1x for each spin, until it falls off the reels and a new golden genie is made. The feature only stops when no more genies have landed on the reels.

Not only does this game look and sound fantastic, but No Limit has also managed to introduce some fun and novel game mechanics that will make this game unlike anything you have played before. While the base game isn’t the most exciting, you need to get into the bonus rounds to win serious cash, and the bonus features are regular and generous enough to ensure you’ll have a great time playing anyway.

We don’t have a magic lamp but can recommend some just as good slots, including Super Fruits Joker, Flame, Queen of the Castle and Emperor’s Garden.