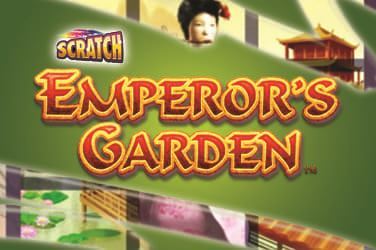 Powered by NextGen Gaming, the Emperor’s Garden Slot Game is an Asian-themed slot which offers a relaxing gameplay experience across the five reels and 25 paylines. The fully-optimised design offers compatibility across all devices, so you can play using smartphones and tablets.

With a Return to Player (RTP) of between a reasonable 95.34%, the Emperor’s Garden Slot Game is considered a medium volatility slot.

The Emperor’s Garden Slot Game unsurprisingly takes place in a garden; the semi-transparent reels sit in front of the garden wall, framed by flowering trees and decorative dragons. Below the reels, there’s a pond filled with Koi fish. The design is relatively colourful but feels calming and zen at the same time. The accompanying soundtrack adds further to the chilled atmosphere.

In terms of symbols, you’ll find a pagoda, dragon statue, pink lily and the Emperor himself, alongside the standard playing card icons, albeit they appear in an oriental font. The playing card icons are the least rewarding of the lot.

The garden icon represents the wild, whilst the Koi symbol acts as the scatter. You’ll only find the wild symbol on the second, third and fourth reels, though they’ll expand to fill the reel and maximise your winning opportunities.

The Emperor’s Garden Slot Game minimum bet is set at a fair $/€/£00.25 per spin, whilst the highest bet is limited to $/€/£250.00 per spin, so the range of stake options should be enough to attract both casual players and high rollers.

There’s an in-built gamble feature with the Emperor’s Garden Slot Game, which offers the chance to double or quadruple your winnings. At your own risk, you can click the button after any win to enter the feature, where you’ll choose card colours and suits to try to boost your prize pot. Choose correctly from red or black to double your win, and make the right pick of the suits to quadruple your prize. If you guess correctly, you can gamble again up to five times – but be careful. One wrong guess will mean you lose it all.

The Emperor’s Garden Slot Game is a decent game with impressive graphics and a high definition design that works fabulously on mobile devices. The accompanying soundtrack helps create a fully immersive experience. The special bonus features offer the chance to significantly increase your prize pot – though we wish there were more features on offer. The gamble option can be lucrative if you’re incredibly fortunate and guess correctly five times in a row, though this is unlikely.