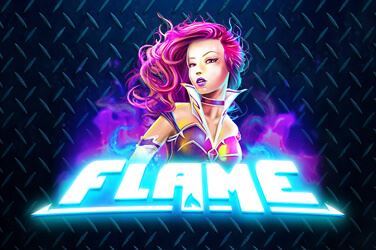 Developed by NextGen Gaming, the Flame Slot Game is a non-progressive slot packed with features such as multipliers, scatters, wilds, free spins and bonus games. The fire-themed video slot has 20 flaming paylines, set within five-reel by three-row layout.

With a Return to Player (RTP) of 96.61%, the Flame Slot Game is considered a medium to high volatility slot so you can expect bigger overall prizes. However, the frequency may be less than it would be in low volatility games. There’s a maximum win potential of up to 6,000 times your total stake.

The Flame Slot Game has some pretty impressive graphics, with the entire design being fully optimised so you can enjoy the same gameplay experience on any device you choose.

The golden lion symbol offers the highest payout and is worth up to 750 times your stake. You’ll also find the flame girl, who only lands on the central reels and acts as a wild, substituting for all other regular symbols within the game. There’s a bonus scatter, alongside a wolf, eagle, fire, water, lightning and a leaf. You’ll also find the standard playing card Royals which act as the lowest value symbols.

Seven mini-features to watch out for

The gameplay is relatively straightforward overall within the Flame Slot Game, so it won’t take long to pick up the rules, despite the seven extra mini-features that can be randomly triggered throughout the base game. They include:

Trigger the free spins round when any three bonus symbols land in view. You’ll be rewarded with 15 free spins, but if you retrigger the feature, you’ll have the chance to take the total to 30 free spins.

The Flame Slot Game is jam-packed with mini-features that appear regularly and offer great rewards. The visuals are great, and the accompanying soundtrack adds excitement to the gameplay. A lot is going on within the game, but the rules are relatively easy to understand, so it doesn’t feel complicated. The free spins can take a while to trigger but are worth it once you manage to land the three bonus symbols.