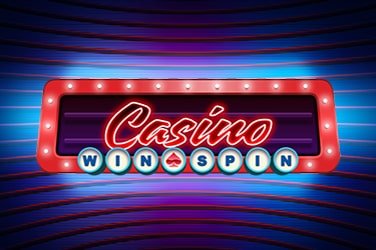 Casino77 is home to a whole host of exciting slot games, each with their own unique features and quirks, but some players enjoy going back to the basics, and this is where slots such as Casino Win Spin come into their own. While there is no free spins feature, the game still packs enough of a punch to make it a popular choice for slot players of all sizes. Let’s take a look.

Casino Win Spin is hosted on a standard 5×3 playboard that is sleek and clean-cut in design. Featured playing symbols include an assortment of juicy fruits, alongside usual suspects such as bars, playing card suits and lucky clover wilds.

In the staking department, players can wager as little as $€£1.50 per spin, but any high rollers out there will be licking their lips at the prospect of a $€£100 max bet.

The vast majority of slot players tend to look out for slot games that have a minimum Returns To Player (RTP) rate of 95% and we’re pleased to report that Casino Win Spin comes in at more than 96.5%, which means that for every $€£100 wagered, around $€£96.50 is returned in winnings. The game plays on a relatively modest volatility too, meaning Casino Win Spin not only represents a visually fresh game, but also a high value one for players looking to get plenty of spins for their money.

Getting yourself a regulation win on Casino Win Spin is nice and straightforward, with players just needing at least three matching symbols on one of the game’s 20 paylines. Playing card suits such as clubs and diamonds carry the smallest multipliers, with bells, bars and lucky 7s carrying the highest multipliers.

The design of Casino Win Spin is a happy marriage between a minimalist playing backdrop, meshed with vibrant graphics and animations. The game may look like it’s lacking in frills on first impression, but once you start spinning, Casino Win Spin really springs into life and is pleasant on the eyes. The visuals are tied together by a futuristic, yet nostalgic soundtrack that adds to the theatre.

The main bonus to keep an eye out for is the Spin ‘til You Win feature, which is triggered when you land matching symbols in reels 2 and 4. The symbol that triggered the feature then becomes the Wild for the bonus round, and any non-winning spin during this round will result in additional bolt-on features that will boost your chances of landing yourself a win in the next two spins. Once a win has been picked up, the feature ends and you start again.

Casino Win Spin is a slot game that covers all bases for players looking for a high-spec slot backed up with a solid RTP and immersive feature rounds. Flexible staking options also make it an enticing option for players on all ends of the wagering spectrum, so come along and have a go!

If you like to spin and win, try out these great slots Fruity Pays, Eskimo Dough, Magic 500 and Reel Empire.