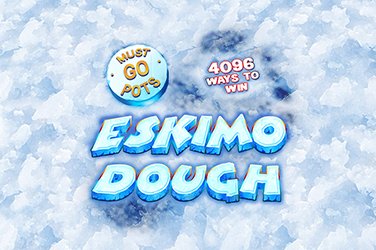 Not every slot with snow in it has to be Christmas themed, and you’ll be pleased to learn that there’s no sign of the jolly guy in the red suit in Eskimo Dough, just a day in the life of a native Eskimo trying to catch his lunch.

It’s a hard life up there in the arctic circle with all that snow and ice, but it’s not all toil and trouble, and there are also some pretty exciting prizes to be found beneath the waves – a fish for dinner or even a fat wad of cash if you’re lucky! So will you come away wealthy or frozen solid? Let’s find out in our Eskimo Dough slot game review.

You might want to put a jumper on before you play this slot because we got cold just looking at the icy reels, but you can’t deny that the developers have put a lot of effort into making the Eskimo Dough slot game look the part. The background to the reels is a complete whiteout with deep snow everywhere you look on the ground, covering the trees and even falling on our poor Eskimo friend fishing in the ice to the right. The reels themselves are covered with symbols themed around hunting and fishing, as well as the surprised face of the Eskimo, presumably when he spots the game’s Yeti lumbering into view! The low-value symbols are the 9 – A in a range of jolly colours, but the addition of a festive sounding soundtrack helps build the mood.

The first thing to know about this game is that it uses a cascading reels mechanic, so winning combos are removed and new symbols fall to take their place, potentially generating new combos that set off a cascade of wins. This mechanic is key to making money in the main game because the bets aren’t all that high at £/€/$10 per spin, so stringing together a nice cascade of re-spins is a good tactic. Wins aren’t massive either, topping out at 50x your bet for five Yeti symbols, but with an above-average RTP of 96.35%, there’s the promise of some much bigger wins in the bonus rounds.

There are a few bonuses to enjoy in this game, so let’s take a look at the random ones first. That mischievous Yeti is the key to your wins here, and in the first instance he’ll throw snowballs at the reels, turning all the symbols he hits into icons of the same value and granting you a win. He can also set off an avalanche that will dislodge the modifiers at the top of the reels and bring them crashing down, awarding your spins with whatever modifiers you’re lucky enough to land. However, the main bonus round is activated by landing scatters: Three scatters grants you access to two floating icebergs that appear on the screen, covered in Yeti footprints. Pick footprints to reveal prizes underneath, which could be instant wins, multipliers or even a random number of free spins. Land four scatters, however, and you can go to the third iceberg that has an igloo on it, and there you can win super and mega spins and even bigger multipliers!

Eskimo Dough is a fun and frantic game that starts off pretty peaceful, as we imagine most fishing trips do, but all bets are off when the Yeti gets involved! Do the best you can with the excellent cascading reels round, but the real action begins when the Yeti grants you those epic bonus features which can turn a good day out into an unforgettable experience!