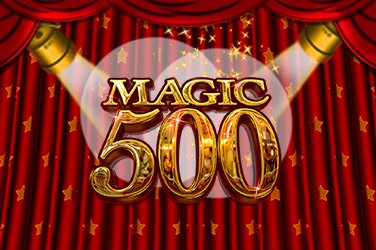 We bet that the first thing most people would do with magic powers is find a way to make themselves rich, which is exactly what you’re aiming to do in Magic 500! Take on the role of a stage magician hoping to amaze the audience with their fabulous tricks, and to make their bank balance a little healthier in the process.

Come for the beguiling visuals and soundtrack, stay for the prizes in this surprising and unexpected slot from Core Gaming. Check out our Magic 500 review below for more information!

We’ve returned to the magic of the stage with slots a few times in recent years, and this game hits all the right notes in terms of the imagery you’d expect. The large 6×4 reels are set on a traditional stage with red and gold curtains and creaky floorboards, while spotlights illuminate a scantily clad female magician as she magics up some symbols onto the reels. As for the symbols themselves, the low-value ones are your standard 9 – A, while the high-value ones are represented by a range of traditional stage magic staples like playing cards, white doves and the magician herself. Watch out too for the wild and bonus symbol, which can substitute for other symbols and activate the bonus game respectively. A third symbol, the mystery, can turn into any symbol and guarantees a win whenever it lands.

Like any good illusionist, this slot is all about presentation and style. While the graphics are only really average, there’s always something going on. The soundtrack responds appropriately to the action, with drum rolls and jingling bells as tricks are performed and appreciative applause from the audience when symbols appear. There are also lots of great visual animations, from symbols disappearing in puffs of smoke to cards flying across the screen and even a flock of white doves emerging from a hat.

In terms of the actual mechanics behind this game, we’ve already mentioned the unusually large 6×4 reels, but we should also say that it’s a cascading reels slot in which symbols that form winning combos are removed. It also pays all ways, with 4096 ways to win, so expect the payouts to come thick and fast. It all adds up to an RTP of around 96.1%, which is about average.

The Magic 500 slot game combines the cascading reels and the free spin bonus to create a clever little bonus round that uses the theme well. Landing three or more bonus symbols on the reels grants you between 8 and 12 free spins, but there’s more. If you land a cascade win in the free spins game, which is to say a sequence of two wins using the cascading reels mechanic, the magic top hat will bestow its gifts on you and allow the magician to pull out a trick. These are awarded randomly and can be anything from random amounts of cash to extra free spins, new multipliers and extra wilds. On top of this there are also random jackpots awarded that are progressive, and based on the amount wagered by other players.

This game is a bit of a surprise package, managing to pack much more than you’d expect into its reels. The presentation is excellent, with all sorts of sounds and animations really helping to bring the game to life, while a random and varied array of bonuses really add to the excitement of the bonus rounds.