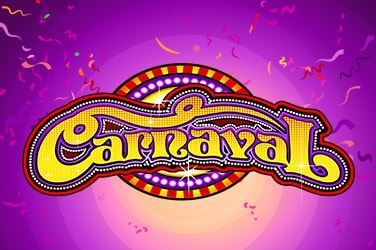 Forget a flight to Brazil, you can engage and enjoy the experience of carnival from your own home with the Carnaval slot from Microgaming.

Carnaval was originally developed by Microgaming many years ago and was one of their most popular and beloved slots. In order to keep the slot relevant and introduce it to a new generation of gamblers, Microgaming re-vamped and re-launched the slot in a new high definition format. The new graphics are incredibly bright and fun, instantly setting the scene of a colourful carnival.

The Carnaval slot perfectly combines modern aesthetics with the slot’s original charm as it features symbols such as the letters A, Q, J, and K, plus trumpets, clowns, dancers and drums. The highest value symbol on the reels is the Carnaval logo, which has the power to award players up to 200 times their original stake if 5 are collected. In keeping with its old school charm, both the wild and scatter symbol appear as written words, helping players to keep track of the game.

Located on the Isle of Man, Microgaming has been creating award-winning gaming software since 1994. The Microgaming team developed the first true online casino software and the first mobile casino software, solidifying their position as pioneers within the online slot and casino world. Despite their success, Microgaming operates with the ethos that numbers don’t define them and continuously strive to create new and innovate games that players love, rather than just looking to hit targets and increase their profits. As an innovative company, Microgaming releases new games and slot titles every month to keep providing their customers with new, exciting games and content.

Carnaval is a 9-payline video slot with an RTP of 96.94%, which is slightly higher than similar slot games. Their bet range is slightly unusual, as players can place bets between $/€/£2.25 to $/€/£90.00, though this price range does ensure all calibre of players is catered to. As you would expect for a Microgaming slot, Carnaval is mobile friendly and can be played on any device, from desktop to mobile and tablet flawlessly.

The game does not currently offer any bonus features, and Microgaming has not announced any plans to change this. If, however, 3 or more scatter symbols are collected on the payline, players have the chance to win between 2-50 times their original stake. Similarly, if a player manages to fill the reels entirely with the Carnaval logo symbol, they will be able to win an impressive 1,800 times their original stake.

Although the slot does not have any bonus features or free spin rounds, its impressive jackpot will no doubt be enough to entice players and keep players engaged. Aside from the structure of the game, the impressive graphics alone are enough to keep a player’s attention as playing this slot truly feels like attending an authentic carnival.

If you like slots we offer a carnival of fun with titles such as Gnome Wood, Humpty Dumpty Wild Riches, Jurrasic World and Poke the Guy.