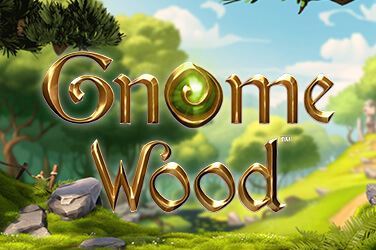 If you go down to the woods today, I suggest you watch out for gnomes, because if you accidentally wander into this gnome’s wood then you’re in for a big surprise! It may look like an idyllic spot for a picnic or a game of football, but there’s actually a lot of cash up for grabs in Gnome Wood if you can help this furry little fellow and his pet mouse cook up some magic spells.

So will you share in this gnome’s treasure, or will you be turned into a frog? Let’s find out in our Gnome Wood slot game review.

There’s no doubt about it, Gnome Wood’s forest is as enchanting as it is enchanted, with glorious golden light shimmering through the trees and butterflies flitting in and out, while ancient mystical ruins sit in the background. The background of the reels is full of this kind of cutesy, fairy imagery and we must admit it looks fantastic as part of the theme. Our friend the gnome lives in a treehouse in the wood and pops out of the door occasionally to say hello and cast spells on your behalf or go for a spin on his rat, really adding to the magical feeling of the slot. The lower value symbols are the symbols of the four elements, while the higher value symbols are items of magical importance such as brooms, cauldrons and spellbooks.

While the main game might be a trove of wonders, the mechanics behind it are rather less fantastical. A standard 5×3 layout and 25 pay lines to play on is what you get, though one of the best features of this game is that you can actually land the progressive jackpot in the main game without having to go through the bonuses as you do in other games. Land five of the golden euro signs to achieve this, and you’ll be rewarded with whatever jackpot is offered, which is unlimited and depends on the performance of your fellow players. These often run into the hundreds of thousands or millions of pounds, so can be life-changing at a stroke. There are also random walking wilds that the gnome magics up and places on the reels, which move from left to right with every spin and generate wins. That probably explains why the RTP is a nice and generous 96.1%, though you’ll be relying heavily on those wilds to boost your kitty.

On top of that chunky progressive jackpot, players can also benefit from a free spins round, activated when three sun symbols land on the reels, because the sun is the source of this gnome’s power. This grants you ten free spins each time, which also introduces more walking wilds including a special purple one that comes with a 2x multiplier on all its wins.

The Gnome Wood slot game has undeniably impressive visuals, and you can’t help being sucked into its world when you see the pretty forest and all the magical creatures that live there. The game itself is fun, and there are enough random features to keep you entertained spinning the reels, while the promise of a massive jackpot is hard to resist for even the most jaded player.