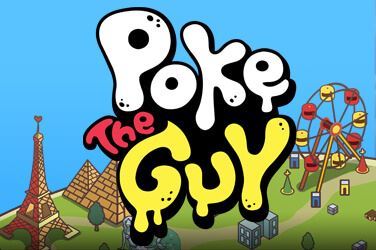 We’re always on the lookout for the next big thing in slots, and we love it when developers break the mould and try something new. Poke the Guy is certainly different in just about every way, from the visuals down to the way it plays, and while we can’t say we agree with all of Microgaming’s decisions, we promise that you won’t have played a slot like this one before.

So can you catch The Guy with your weapon as he travels the world, or will you be grounded? Let’s take a look in our Poke The Guy slot review.

Poke the Guy takes a lot of its inspiration from Japanese arcade games in its art style, and it’s extremely minimalist and cartoonist. The game is very simple and consists entirely of a stylised map of the world that is really only recognisable through the global landmarks scattered around the continents such as the Egyptian Sphinx, the Little Mermaid, Mount Rushmore and the Eiffel Tower. Diving deeper into the surreal, the game introduces us to The Guy, a barrel-chested, bearded man dressed in a yellow one-piece that’s cut to the waist, sporting a troll doll hairstyle. He hops around the world striking a range of anime-inspired poses, and it’s apparently your job to lob random objects at him with the electric cattle prod at the bottom of the screen. You can throw all sorts of stuff, from boots to dead fish, and you’re ultimately trying to hit him in the face to halt his global tomfoolery.

You’d be hard-pressed to recognise this game as a slot at all because it lacks just about all the conventional slot features aside from the betting. There are no reels, no rows, no wilds or scatters, no special features or bonus rounds. There is only one mechanic: Place your bet and throw an object. That’s it. You can bet between £/$/€0.10 and £/$/€30 per throw, though you can’t aim the weapon or influence where the objects fall, and if you hit The Guy you are treated to a winning multiplier from 1x to 500x at random. That’s a potential jackpot of £/$/€15000 if you’re lucky enough! We have to give the game credit for its simplicity, and it’s unlikely you’ll ever find a game with less complex rules, but it’s hard to shake the sneaking feeling that it’s all completely random and unconnected with your choices or actions. The developers claim an RTP of 94.89%, which is slightly below average, though we have no idea how that was calculated given the lack of normal slot mechanics.

As mentioned above, this game contains no bonus features or bonus rounds. Not even a measly wild. So this is definitely not the game for you if you’re partial to a mini-game or progressive jackpot.

The Poke The Guy slot game is certainly different, as well as being all kinds of weird. It’s definitely worth a play just for its novelty value alone, and you’ll definitely want to throw things at The Guy as soon as you see him, but there is absolutely no depth to this slot at all, so it’s hard to imagine seasoned gamers having much patience with it.