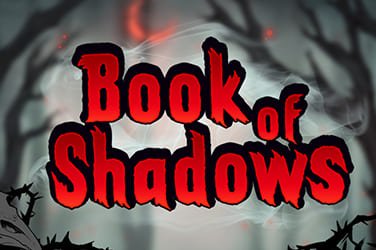 If you go down to the woods today, you’re going to get quite an unpleasant surprise, because instead of bluebells, prancing animals and picnics you’ve got animal sacrifice, raining fire and devil worship!

Book of Shadows is Nolimit City’s debut into the darker side of life, and this forest is definitely more Blair Witch than Hundred Acre Wood, so get ready to hide behind the sofa and spin away in the hope of landing more than the Devil’s due. So is this slot devilish fun, or is it just Hell? Let’s take a look at our Book of Shadows slot game review.

As always with Nolimit City slots a lot of effort has gone into the art and design behind this slot, so it looks fantastic. The background to the reels is a spooky forest, brought to life with animated swaying trees that disappear into the mist and flecks of sparks that drift about like rain. The ground is littered with skulls, while the reels are gripped by thorns and covered in satanic looking writing. This slot owes more than a little to the Netflix show The Chilling Adventures of Sabrina, both in its aesthetics and in its art, utilising a similar comic book style and a few concepts shared with the show like its high-value symbols: a satanic book, a cat, various potions and ingredients, a horned skull and a devil-worshipping girl. The music is more subtle than you’d expect, creating a spooky ambience rather than scaring the pants off you, while the animations are bright and well designed as you win combos.

One of the major features in the Book of Shadows slot game is the ability to decide how many pay lines you play with, using the Shadow Row function to select between three rows and 10 pay lines up to five rows and 20 pay lines. The cost for this is adding 50% to the bet each time you add more rows, so you could start off with a maximum of £/€/$100 per spin and end with a maximum of £/€/$200. This game also employs a Lucky Locks mechanic, so for a portion of the bet, you can choose to hold one or two reels in place with the other reels spin around it. You might use this feature to hold two winning symbols while you try for a third, for example. Nolimit City categorises this slot as one of their higher variance games, and you can see why with a maximum win of 30,000x your stake. The RTP tops out at 96.19% when you play on five rows, so it pays to play with more if you can stomach it!

With so many other features you’ll be pleased to learn that the bonuses are fairly simple. Start the free spins by landing three Book of Shadows scatters to get ten free plays, during which time one symbol becomes golden, and will expand to fill the reels whenever it lands. There are also a couple of gamble features, one which allows you to go double or nothing on the next card drawn after any win, and one which allows you to pay to spin a wheel and get a random bonus.

Nolimit City has done a great job capturing a creepy vibe in Book of Shadows, and this, combined with the tremendous high variance wins, possible make for a rollercoaster ride of a game. This game is for the high rollers, as you have to bet bravely to access the big wins, but nothing ventured, nothing gained.

Our slots are not hiding in the shadows. You can find 100’s here at Casino 77, such as Reign of Gnomes, Lotto Lucky and Thor Hammer Time.