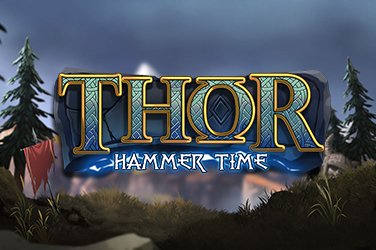 Slot developers love going back to the age of the Vikings for inspiration, and it’s easy to see why. All that plunder and loot to be had is an exciting prospect even for peaceful modern slot players, and there’s plenty of gold to go around in Thor Hammer Time from highly rated developer NoLimit City.

The gods will need to be on your side if you’re going to win big, but will you become a Viking hero or be forgotten by history? Let’s find out in our Thor Hammer Time slot game review.

NoLimit City is famous for their innovative and groundbreaking slot design, but they keep it nice and traditional with this slot’s visuals, depicting a pretty traditional Viking scene of the Scandinavian countryside alongside torn battle flags and the ravages of war. The symbols on the reels are similarly traditional, depicting all the usual tropes of Viking myth and legend: The low-value symbols are Viking runes that glow as they make up combos, while the high-value symbols include winged helmets and jewelled rings, decorated cups, axe and hammerheads. The background to the reels is also pretty cool looking; a grey slab of stone carved all over with symbols, while sound effects and animations add to the stirring martial soundtrack to bring the theme alive.

This is a slot in which you’ll live and die by its bonus features and so the mechanics of the main game are less important, but players can expect a fairly standard five-reel and three-row arrangement that incorporates 20 pay lines and a maximum bet of £/€/$100 per spin. The highest paying symbol is the golden Thor’s Hammer, which pays 15x the player’s stake, though this can be boosted significantly by winnings in the bonus rounds contributing to an RTP of 96.03%.

The bonuses really are everything in the Thor Hammer Time slot game, and while some of them are totally random the others are activated by landing bonus symbols to generate separate features. Rune Raze and Hammer Time are two of the random ones, and both transform low-value symbols into high ones, the runes into better symbols and any symbol into Thor’s Hammer respectively. Thor’s Lightning activates when you land a bonus on the 5th reel, granting random bonuses including up to 7 random wilds and a random multiplier up to 4x, while two of the reels may become wild too. Scatters also play a part in this game, and if you land two of them then the rest of the reels spin around them while they are locked for a chance to land a third. If you manage to get all three scatters you’ll be rewarded with 12 free spins while the reels are showered with multipliers and extra scatters and wilds.

Thor Hammer Time is quite a volatile game that relies a lot on its bonuses to bring the big payouts, but luckily these bonuses land regularly and generate some very exciting payouts when they do, so you don’t have to worry about your prize fund! If a shot at Valhalla is your thing, there’s no better game to take that shot than this one!