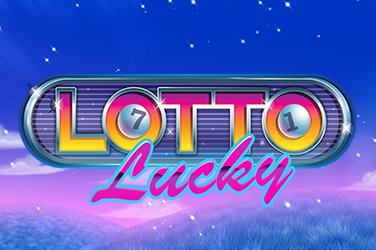 Lotto Lucky might not look like much, but inside the slightly dodgy looking computer graphics is actually a pretty unique take on slot games that you might not have seen before.

Luck is a big part of any slot experience, so it’s nice to see that they’ve done their best to gather as many lucky symbols as possible to help give you a boost, while an interesting game mechanic could end up being your lucky style of slot! But is this your lucky day, or can you just not catch a break? Let’s find out in our Lotto Lucky slot game review.

The graphics in Lotto Lucky are certainly distinctive and there’s a pretty decent theme that emerges based around lucky symbols. Just about every lucky symbol you can imagine gets a run out in this game, including lucky dice, lucky rabbits, lady birds, lucky horseshoes and four leafed clovers. The background of the reels is also distinctive, a trippy scene of grey grass and a dreamy purple sky with fluffy white clouds blowing in the breeze. There is no music and only basic sound effects, but it’s the wins in this simple slot that you’ll enjoy, not the bells and whistles.

Looking at this slot you might think you’ve got it pinned as a three reel, three row slot like you used to see on physical slot machines back in the day, but you may be surprised to learn that each individual symbol is its own reel. They’re completely unrelated to each other, and you don’t have to land them in any order, so it’s like every symbol is a scatter. As a result the pay table is pretty complicated, but the game’s logo is the highest payer, giving you 555x your stake for nine symbols, while just about any valid combination of balls is worth double figures, which is fairly generous compared with similar games. The RTP is a hair under average at 95.95%, so you’re in with a good chance of building up a hefty prize kitty!

There are a couple of bonuses available in this game, one of which is constantly active, dictated by the ‘lucky’ lotto symbol that appears to the right of the reels on every spin. Land three or more of the lucky symbols and they will all stick in place while the rest of the symbols spin, with every new lucky symbol that lands being added to your combination. You can keep spinning until no more lucky symbols land, and then your total is added together and calculated, and multiplied by two for good measure. A second bonus game is a standard pick and win, in which you’ll be shown ten lotto balls with cash prizes and multipliers written on them, which will then be mixed up. Simply pick from the balls and see if you can grab the biggest prizes!

The Lotto Lucky slot game is a fun and unique slot experience that is worth playing just for the novelty alone. On top of the fun there are also some great cash prizes to be won, as well as some top quality bonuses to cap it all off!