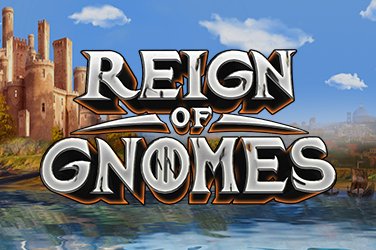 Revolver Gaming’s Reign of Gnomes – which is not to be confused with a hit TV show of a similar sounding name – is a game full of quirks and oddities that combine to make it a fun, unique slot that has lots to offer players at each end of the slot spectrum.

A 5×3 playboard isn’t anything we haven’t seen before, but a gnomey take on Game of Thrones certainly does fall into the category of themes we don’t see all that often.

In addition to your typical playing card values such as ‘10s’ and ‘Ks’ players also need to keep an eye out for some very nicely crafted gnome playing symbols that have their own individual animations that add their own fun touch to the game.

As always, we recommend players swerve slot games that carry a Returns To Player (RTP) rate of under 95% and you will be relieved to discover that Reign of Gnomes respectfully weighs in at just under 96%. Coupled with the game’s modest volatility, this means you should get plenty of value out of your playing budget, even if you like to keep stakes small.

Speaking of which, the minimum punt per round on Reign of Gnomes is $€£0.40, while the high rollers are very well taken care of, with a max bet of $€£200 per spin.

At the risk of tempting fate, it isn’t too taxing to bag yourself the regulation wins of Reign of Gnomes, with players just needing to line up at least three matching symbols on one of the game’s 243 paylines.

The game plays out on what is a quintessential medieval backdrop and features a handful of lovable characters that are packed with personality. The glistening lake upon which the castle backdrop stands is a lovely aesthetic touch, while the intense soundtrack ties in very nicely with the overall concept.

There are three chief bonus symbols you’ll want to keep tabs on. First up, the Reign of Gnomes symbol carries bonuses worth up to $€£20 if you can land five of them in one spin, while a metallic blue symbol is the game’s chief Wild and substitutes all live playing symbols into cash bonuses. Reign of Gnomes’ feature game is the Dragon Spins bonus round, which is triggered when you land at least three dragon egg scatter symbols anywhere on the playboard. This feature gives players the chance to pocket cash boosts, along with the possibility of topping up your free spin bounty to extend the feature game.

Reign of Gnomes is a very well thought out game that takes a simple yet fun concept and translates it into an immersive game that is certain to be popular among players. The game is brimming with paylines and bonuses, giving players of all budgets the chance to pocket tidy wins, all while having fun along the way.