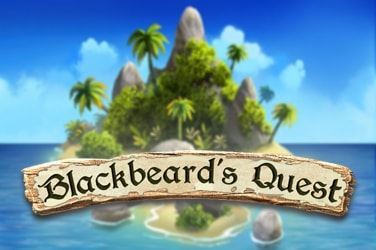 Developed by Tom Horn Gaming, the cheerful Blackbeard’s Quest Slot Game is a pirate-themed slot, set on a tropical island where you’ll have the chance to find some hidden treasure. It has a standard five-reel, three-row layout, and is fully optimised to play on all devices, so you can choose to play on your computer or mobile.

With a Return to Player (RTP) of 96.31%, the Blackbeard’s Quest Slot Game is considered a medium volatility slot. The video slot has nine paylines offering a maximum win of 5,000 times your total bet value.

The Blackbeard’s Quest Slot Game features cartoon-like graphics, with the reel set sitting in front of a tropical, sandy beach complete with palm trees and clear blue skies that scream “summer”. The accompanying soundtrack and sound effects further add to the cheeriness of the game.

You’ll find Blackbeard himself, alongside a female pirate, pirate ship, elusive treasure map, and treasure chest in terms of symbols. You’ll also find classic Royal symbols. Blackbeard is the one to watch out for, paying out the most significant rewards. The treasure chest is also worth keeping an eye on, as landing them on the first, third, and fifth reels will trigger the thrilling bonus round feature.

Land the treasure chests to unlock the bonus round

Landing three different treasure chests within the Blackbeard’s Quest Slot Game will trigger the exciting bonus round, providing they land on the first, third, and fifth reels. You’ll be rewarded with ten free spin rounds when you land three, but if you can manage to match three more, you’ll receive extra spins.

While the free spins are in play, the treasure chest symbols team up with the Blackbeard symbol and all act as wilds, substituting for other symbols on the reels and increasing your chances of winning. Blackbeard also has between 10 and 5,000 coins attached to his poster throughout the round, so if you land him multiple times, it’ll result in a very generous loot to walk away with.

Play the double or nothing card game

If you’ve already landed a win from the crew, you’ll be invited to play the double or nothing card game. As the term suggests, you’ll have the opportunity to pick the next card’s outcome and will have a 50% chance of landing a win or walking away with nothing.

The Blackbeard’s Quest Slot Game is an engaging video slot which offers the chance to hit a generous jackpot and walk away from the tropical island setting with some serious winnings. The transforming wilds help to create winning paylines, while the bonus round is an exciting addition to the overall gameplay experience.