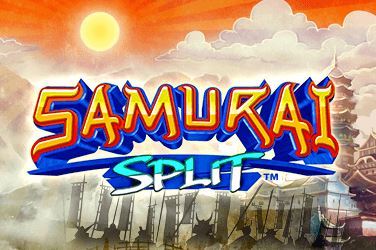 Regardless of the real truth behind the legends of Japan’s elite warrior caste, they sure make for cool stories. Samurai Split dives headlong into that rose-tinted vision of the period, utilising comic imagery alongside truly gorgeous artwork to bring that semi-mythical time to life.

But will Samurai Split bring you treasure and honour, or is it just a load of old tales? Let’s take a look in our Samurai Split slot game review.

The first thing to say about this game is that it looks fantastic, chock full of a combination between cartoonish, comic book imagery of Japan and fine art in the style of Hokusai. The background sums this up, emblazoned with a scene straight from medieval Japan complete with ornate temples, swirling clouds, a majestic mountain and the waving banners of a Samurai army.

Meanwhile, a great variety of Samurai inspired symbols grace the reels, including bottles of sake, military banners, tiered pagodas and legendary katanas. The downside to this is that the lower value symbols are just the standard 9 – A given a Japanese makeover, which is slightly disappointing. Alongside all these great symbols, gorgeous animations help spice the game up even more, with fiery special effects and acrobatic samurai attacks across the reels.

The major game mechanic featured in the Samurai Split slot game is referenced in the title and involves the titular warriors hopping across the screen to deliver a slashing blow to one or more symbols, cutting them into two in a way that delivers two separate wins using the same symbol. This has the obvious effect of at least doubling your wins on occasion, which is good, because the regular payouts aren’t exactly great, topping out at 500x your stake for five wilds. That all changes when you land a few good splits, though, because that can be boosted by up to 32 times! This is a pretty regular occurrence in Samurai Split, which explains the generous RTP of 96.6%, a decent way above average!

The splitting mechanic is very important in this game, and not only determines how well you do in the main game, but also in the bonus rounds too. Land five scatters in the main game to grab yourself 15 free spins, which is nice, but any of those scatters can be split too to deliver yet more free spins: At the top end, that number can stretch all the way to a whopping 480 free spins! A truly huge figure you’ll struggle to match anywhere else. On top of this, you’ll play the bonus rounds only with the highest value symbols, wilds and scatters, so don’t worry about being short-changed by low-value symbols!

Samurai Split is a fun, funny and great looking game that you can’t help but enjoy even if you have no interest in Japan at all. Not only are the visuals gorgeous, but the comic book style of the symbols also adds a touch of fun to proceedings, and the antics of the symbol splitting samurai are exciting, not to mention intensely valuable!