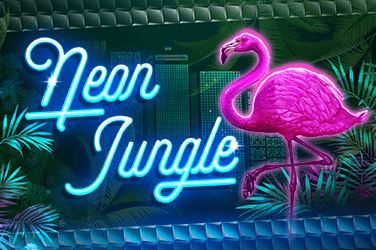 You might find your average casino city described as a neon jungle, and that’s usually supposed to be a metaphor for all the confusing shimmering lights, neon signs and flashing lasers that tempt gamers into each establishment. Here, the phrase is taken a little more literally.

Neon Jungle combines animal and urban in this striking and interesting theme that places a variety of jungle life in the big city, in an experience that is cool and modern. But is it rewarding? Let’s find out in our Neon Jungle slot game review.

Slot games could be criticized for falling back on old themes and dated concepts. After all, there are only so many fruit machines and Egyptian tombs a person can take. Which is why it’s so refreshing when something new and different comes along, and the Neon Jungle slot game is certainly that!

The slot background is a modern skyline rising out of a thicket of ferns and trees, all bathed in an unnatural greenish glow of neon light, while the windows of the buildings are a mass of colour. It’s strikingly modern and very cool, much like the symbols themselves. The low-value symbols are the standard 9 – A icons, though given a cool looking neon light makeover, while the high-value symbols are photo-realistic depictions of jungle animals from frogs and parrots to white tigers and tropical plants.

It’s not just the looks that are a little odd, either. The bonuses are awarded in a rather unique way that’s not dependent on scatters or wilds as they are in other games, though this game has those too, a monkey and a lizard respectively. Instead, all that is required to launch the bonus games is a neon circle around one particular bonus symbol, not three or more of any one symbol as you may be used to. This mechanic also applies in the main game and can result in you landing multipliers of up to 4x at random as circles appear on the lesser symbols too, or 250x your stake if it lands on the lizard scatter. This all adds up to an RTP of 96.16%, slightly above average and enough to keep you interested!

On top of this generous main game feature, are a couple of extra bonus rounds, a free spins feature and a unique Keno inspired game that is a nice surprise for players. The free spins are simple: Land a ring on the snail free spins icon and you get six free spins. Keno is slightly different, especially for younger players who might not have played this retro classic before: Land a ring on the bonus icon and the Keno game will begin, challenging you to pick 10 of the 28 numbers on a board. 15 of them will be drawn, and you get a prize that gets bigger the more correct numbers you match, up to a maximum of 20,000x your stake for 100%

Neon Jungle is a rare find that is both new and interesting while also being fun to play and rewarding. It’s a game that offers new looks and new mechanics whilst not forgetting what makes gamers play the slots in the first place: Cold, hard cash. It’s also nice to see Keno again, a retro favourite that we haven’t played in years!