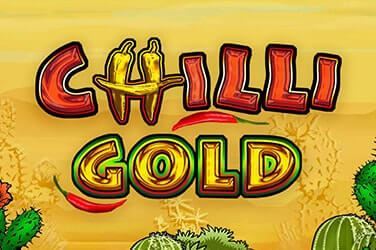 Chilli Gold 2 – Stellar Jackpots is a slot game by Lightning Box and Nyx, two seasoned slot providers. The game was first released in 2016, and it’s obviously a sequel to the popular slot Chilli Gold. The game sports a vaguely Mexican theme, with symbols including maracas, guitars, and a man in a sombrero. Cactuses and donkeys look on from beyond the reels.

Chilli Gold 2 – Stellar Jackpots is a great slot game for players who enjoy bright, upbeat slots and those who love the incentive of a possible jackpot win.

Chilli Gold 2 is a simple slot which follows tried-and-tested gameplay mechanics. It’s a paylines slot with 40 paylines, where players must line up matching symbols on the reels to win cash prizes.

It’s also worth knowing that any wins which include a red chilli wild symbol are automatically doubled; this is a small little bonus but one that can really lead to some decent wins.

The game’s primary bonus feature is a standard Free Spins round, which can be triggered when players land wild gold chillies anywhere on the reels. Up to 21 free spins can be won this way, and during free spins stacks of wild gold, symbols can be added to reels 2, 3, 4, and 5, making this round ultra-lucrative for lucky players.

Of course, there’s also the Stellar Jackpots aspect of the game. The Stellar Jackpots bonus can be triggered randomly at any time. During this bonus, players must shoot icons to proceed higher in levels or claim a prize; there are six levels to advance through to win the top prize. Three jackpots in total are up for grabs at any time.

Players who enjoy playing slots on the go won’t have any issues playing Chilli Gold 2 while out and about; it’s a great game to dip in and out of and it runs smoothly on both iOS and Android devices, with the game’s graphics looking good on both systems.

Chilli Gold 2 offers a return to player of 96.32%, which is around average for a slot game of this type. This means that for every £100 that players spend on the reels, they can expect to win back around £96.32. This isn’t bad, and the game’s jackpots also offer good opportunities for players who hope to strike it lucky.

Chilli Gold 2 is a basic slot game featuring, mostly, game features and mechanics we’ve all seen a hundred times before. That said, it’s a fun slot to play and the bright theme is likeable, and the game’s Stellar Jackpots feature does add a little extra incentive to spin the reels one more time.