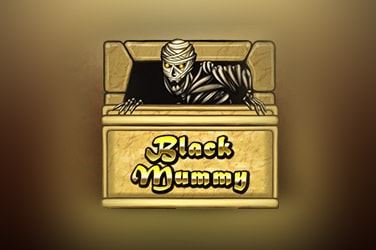 Brought to you by Tom Horn Gaming, the mysterious Black Mummy Slot Game is set amidst the pyramids in ancient Egypt. The game has a standard five-reel, three-row layout, and is optimised for all devices, so you can choose to play on your computer or mobile.

With a Return to Player (RTP) of 96.00%, the Black Mummy Slot Game is considered a medium volatility slot with a maximum win of 500 times your total stake. It’s a pretty basic slot which might be skipped by high-rollers, though there are a couple of standout features which make it worth a chance.

The Black Mummy Slot Game graphics are relatively simple and lack a high level of animation, but they fit the theme. The reels sit within an elegant, gold frame, with a sandy Egyptian pyramid scene behind them. The colour scheme flows throughout the reels and background, featuring luxurious midnight blue tones alongside the traditional black and gold.

The symbols are well-designed and in keeping with the Egyptian theme. The usual Royals are included, but you’ll also find a golden pharaoh’s mask, winged scarab, and expensive-looking bracelet, alongside the mummy figure itself. The mummy is the only symbol that you’ll see become animated when you land a win with it, which makes sense given the name of the game.

Though the mummy is the most valuable symbol in play, you’ll only be able to trigger the 100x bet payout if five mummies are placed on a payline. Unfortunately, landing three and four mummies won’t get you the big win you want, so look out for landing five!

The Black Mummy Slot Game isn’t packed with features and is unlikely to be the most exciting game for high-rollers, but it offers the chance to land some decent wins by landing the mummy symbol. Each outcome that mixes royals and wilds provide the opportunity to be rewarded with some impressive winning results. The graphics admittedly leave a lot to be desired, but the surprise element within the game more than makes up for it. The Black Mummy Slot Game’s slow and relaxed pace means that it could be a good option for those just starting in the world of online slots and looking for a leisurely gameplay experience.

We offer such a range of slots that if you want something a little different, you’ll be spoilt for choice and could try Rush Football Go!, Rush Dogs Go!, Visitors, or if you fancy a casino game, Blackjack Pro could be for you.