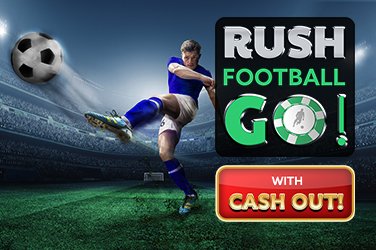 The virtual sports era may not be universally beloved by all, but it’s certainly going to have an important role to play moving forward in the slot business – or at least, that’s what we suspect.

The beautiful game, better known as association football, has been regularly pinpointed as one of the most popular sports in the world, which is probably why it features in this series. There are no reels or paylines to worry about here and instead, it comes down to betting on a team and deciding whether or not they’re going to win the virtual game in question.

Instead of symbols, we have a range of different clubs with various kit colours – so keep an eye out for the likes of Islington, Bournemouth and Liverpool.

The return to player (RTP) percentage is an important piece of the slot puzzle and, while it may not seem like it, that’s also true for the Rush Football Go! slot game. The reported RTP for this one comes in at 94% which is quite far below the industry average, but with N/A volatility, you can go into this slot knowing that pretty much anything can happen.

The information is sketchy here with $€£0.20 being the minimum stake and the maximum being touted as anywhere between $€£100 and $€£1000 which is vague, to say the least. From there, some sources have reported that it’s possible to win up to $€£50,000 coins.

Even though it seems quite basic, we quite like some of the primary elements associated with the Rush Football Go! slot game. The gameplay itself is smooth and in-depth, the commentary is fun, and it’s easy to follow.

Instead of wilds and scatters, there are different types of betting you can work into your game here.

Over Match Goals – select how many goals you think will be scored to increase your odds and possible winnings.

Correct Score – attempt to predict the exact scoreline of the game you’re watching.

The Acca – everyone loves a good acca, and you can include up to four fixtures in yours. Whether you’re deciding on both teams to score, all home teams to win or no teams scoring (the highest possible payout), there are certainly options out there.

The Rush Football Go! slot game is a little bit wacky and a little bit all over the place, but such is the nature of virtual sports. The fact that it’s so unconventional is probably why it’s actually so entertaining to play because it’s a complete escape from what we’re all used to seeing in slot gaming.

It can get boring quickly if things aren’t going your way but celebrating a goal as if your actual team scored it is quite the bizarre thrill.