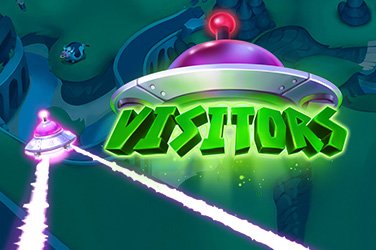 We have been fascinated with aliens since the beginning of our existence, probably, and ELK Studios uses this curiosity to create an alien-themed slot game here.

The game is set in a small town where there is an alien invasion. Thus, the reels are set against the backdrop of this town, with buildings, roads, streams, hills, farms and more dotting the landscape. The visuals are all quite cute and cartoony, which makes this game quite fun to play. There is a soundtrack as well with some typical sounds used for alien themes, with a child also saying “they’re as real as human beings”, “they’re here” and other statements of this nature. The view is from the top, so it is as if you are looking down on the town from an alien spaceship, which is another neat little addition to the game.

The game has five reels, five rows and 3,125 ways to win. You can bet from $/€/£0.20 up to $/€/£100 per spin, while you get wins for landing at least three matching symbols on successive reels, starting from the first one. You have the option of using the Auto Spin feature to have the reels spin without any manual input for up to 100 spins, while the Quick Spin option will make the reels spin faster. There are a number of control options as well to help you customize these features.

The symbols also appear in the same manner, as if you are looking down on them from above, with the card royals from A to 10 done in the style of alien writing or a mysterious language. The higher value symbols are a fountain and four different coloured houses. A flaming Wild is also present, which will substitute for all other symbols on the reels, while the red clock house symbol is the most valuable, paying out a maximum of 15x of your stake for five matching symbols.

Abduction feature: you get 1 respin with a win multiplier up to 15x

Alien Attack feature: you get 1 respin with up to 5 sticky wild symbols added to the reels

Landing three of the spaceship bonus symbols will trigger the Alien Invasion Free Spins round. Here the reels transform into 25 mini reels, where only silver and golden spaceship symbols will land. You receive five free spins to start with, and every silver spaceship that lands will give you a win as well as an extra spin. There are multiplier walls of different values also built on the reels – every silver spaceship that lands within these walls will double the value of that multiplier, which can go as high as 4,096x of your stake. A golden spaceship will double all the multipliers on the reels, regardless of where it lands.

This is a medium to high variance game with an RTP of 96.1%, and a hit frequency of 22.6%, meaning that on average, just under 1 in every 4 spins will result in a winning combination.

This is an excellent game from ELK Studios – it uses a popular theme in a fun and light-hearted way, with huge win potential in the bonus games.