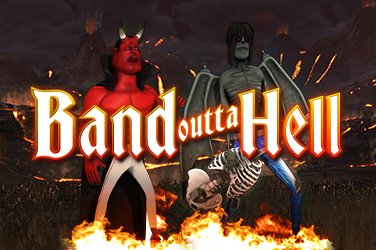 With a Return to Player (RTP) of 95.95%, the Band Outta Hell Slot Game is considered a medium volatility slot.

If you’re a fan of rock ‘n’ roll music, you’ll love this. The Band Outta Hell Slot Game takes place at a lively rock concert set in the depths of a burning hell. The design is well-polished with high-quality graphics, and the reels positioned on an illuminated stage. As expected with a rock ‘n’ roll-themed slot, the soundtrack is excellent, with an amazing guitar solo kicking in whenever you spin the reels.

In terms of symbols, nine make up the standard set, with the usual playing card royals – J, Q, K and A – being the lowest paying four. The others include various members of the band, alongside pieces of equipment. Expect to see speakers, a guitar-playing skeleton with wings, a character who resembles the Hulk, a party girl, and the stage, alongside bones, skulls, drums and even the devil.

The free spins round can be triggered by landing three or more scatter symbols. The exact number of free spins you’re rewarded with is determined by how many scatters trigger the feature. Land three scatters to receive eight free spins, four to get 12 free spins, and five to enjoy 18 free spins.

Any devil wilds that appear on the second or fourth reels will expand to turn the entire reel wild throughout the free spins round, increasing your odds of forming winning combinations. On each free spin, an instrument symbol is chosen to act as a random wild and can double the prize value of any winning combinations it helps to create. It’s possible to retrigger the free spins feature by landing a further three, four or five scatters.

The Band Outta Hell Slot Game is a superb slot with excellent theming and crystal-clear graphics. Rock ‘n’ roll fans will appreciate the outstanding accompanying soundtrack, guitar solo effects, and unique theme. The winning potential is fantastic, especially during the free spins round if you land the right symbols and form winning combinations with the random wilds. We like that this can be triggered, further boosting your chances of adding more winnings to your prize pot. We’d like to see some more intense multiplier features, though it’s still a great game due to the multiple wild options.

We have 100’s of slots, and you’ll find something that you’ll love Wu Xing, Monster Wheels, Goldwyn’s Fairies and Cool Wolf.